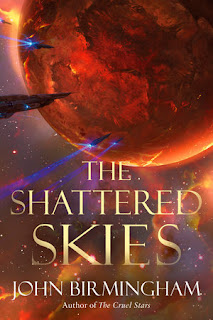 Weapons of Choice, and other novels, as well as Leviathan, which won the National Award for Nonfiction at Australia’s Adelaide Festival of the Arts, and the novella Stalin’s Hammer: Rome. He has written for The Sydney Morning Herald, Rolling Stone, Penthouse, Playboy, and numerous other magazines.

Birmingham applied the Page 69 Test to his new novel, The Shattered Skies, the sequel to The Cruel Stars Palms, and reported the following:

Here’s a weird turn of the roulette wheel. The Shattered Skies is a ‘band of five’ story. But none of our five heroes appear on the 69th page of the book, or the chapter containing it. Instead we visit with Jonathyn Hardy, father to Lucinda, recently promoted in battle to the command of the Defiant, the last surviving warship facing off against humanity’s implacable enemy, the Sturm, as extreme a bunch of species-purist space Nazis as you’re ever likely to find.

There are no massive space battles, no super intelligent machine minds at work, no weird gene-modded rhino-man hybrids with big honking guns anywhere near this page or this chapter - Which does make a change from the rest of the book.

But oddly enough, I think the Page 69 Test sort of works in this instance. In The Shattered Skies, the follow-up to the origin story of The Cruel Stars, we spend a bit more time with the enemy. We begin to understand, if not to share, their motivations and part of the way I did this was to rescue Lucinda's dad from a debtors’ prison on a colony world run by one of the worst corporate empires within human space.

As Jonathyn Hardy shambles through a pleasant and comfortable refugee camp run by the supposedly inhuman Sturm, we get a close look at the consequences of ceding unfettered power to private capital.

He guessed there were a few hundred people inside, mostly freed prisoners, like him. They all wore new coveralls stenciled with the words 'agronomy services', but they also had the look of ragged scarecrows about them as they moved through long lines of plantings. It was hot and most of the workers had either rolled up their sleeves or even peeled down the tops of their coveralls to expose army-green T-shirts, dark with sweat. Their arms were thin. Their cheeks sunken. But they stood up straight, too, and walked with confidence, not the cowering, anxious half-step of somebody who expects to be whipped at any moment.

For a space opera which is otherwise full of exploding stars and murderous robots, it’s an oddly quiet, mournful scene. But it cuts to the bone of a question I wanted to ask in this second book. Is humanity worth saving?

My Book, The Movie: The Cruel Stars.