Jacquelyn Mitchard is the New York Times bestselling author of 22 novels for adults and teenagers, and the recipient of Great Britain’s Talkabout prize, The Bram 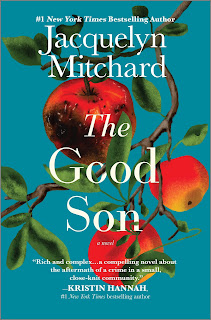 Stoker and Shirley Jackson awards, and named to the short list for the Women’s Prize for Fiction. Her first novel, The Deep End of the Ocean, was the inaugural selection of the Oprah Winfrey Book Club, with more than 3 million copies in print in 34 languages. It was later adapted into a major feature film starring Michelle Pfeiffer.

Mitchard applied the Page 69 Test to her new novel, The Good Son, and reported the following:

On page 69, a reader would see a pretty important statement of a theme in The Good Son — which is an essential question: How do you love and support your child, knowing your child has done something unspeakable? On this page, Thea, the mother of Stefan, the boy convicted of murder, is talking with her husband Jep about how difficult it is to be supportive after Stefan is released from prison, because she has her own misgivings about her son. Finally, Jep says, “'You know, whatever doubts we have, we’re the counterweight. Against what anyone else says. We have to be the one thing he can count on. The thing is, how?’"