Barbara Nickless is the Wall Street Journal and Amazon Charts bestselling author of the Sydney Rose Parnell series, which 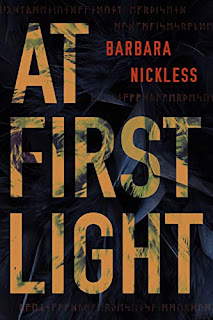 Nickless applied the Page 69 Test to At First Light, the first novel in a new series starring Professor Evan Wilding, and reported the following:

Evan said, “If memory serves, the Prose Edda refers to dwarfs as maggots festering in the flesh of the primordial being Ymir. Also sexual predators who hunger to bed goddesses.”

“Oh. Sorry.” Diana looked disappointed, then brightened. “You should check it out the club anyway. I’ll be your bodyguard.”

He made a noncommittal grunt. “Let’s back up to that comment about me coming down from my castle. What are you implying?”

It was her turn to blush. “You’re a man of the people, Evan. I didn’t mean it that way. Just that maybe you should live a little. You know, get out once in a while.”

“Ginny is good company. Better than most humans.”

She let his words hang in the air. He glared at her.

The moment ended with Evan’s phone blaring “I Am Woman.” It was his ringtone for Addie.

He answered with, “I’m still working on it.”

“You haven’t translated the runes yet?”

Her sigh came over the phone. “Anyway, I’m downstairs in the lobby. I’m also kind of double-parked behind your fancy sports car.”

“I wouldn’t advise that. Campus police are notorious.”

“I won’t be there long. I need you to go on a little drive with me, Evan. We’ve got another murder.”

What an intriguing test! I intend to apply it to novels I’m reading, as well as to my own work.

Readers opening randomly to page 69 In At First Light might find themselves confused. The page concerns a bit of dialogue provided mostly without attribution—and without an introduction to any of the three characters involved (since they’ve all appeared in the book multiple times).

However, page 69 does do two critical things, which is what makes the test so interesting. One, it highlights one of the book’s themes of how easy it is to let our perceived shortcomings lead us to avoid interacting with other people. And, as the end of a chapter, it provides a hook in the ongoing mystery investigation by bringing in the discovery that there has been another murder. This discovery will ultimately lead to the revelation that the police and their consultant are dealing with a serial killer.

At First Light was written during the first year of the pandemic and during a time of great grief for my family. Badly needing distraction, I dove headfirst into the research, returning to my long-ago love of Old English poetry, Nordic literature, J.R.R. Tolkien, and Viking culture. As writers, we’re taught to only show the tip of the iceberg when it comes to our research (as well as other aspects of our fiction). But my editor was kind enough to tell me to leave all the research in and we’d work on it during the developmental edit. A lot came out, of course. But a good amount stayed in.

The novel features a unique protagonist—a forensic semiotician (someone who studies the signs and symbols left at a crime scene by the killer) who is also a dwarf. Thus, Dr. Evan Wilding’s view of the world is different for many reasons. It was wonderfully distracting to move through my fictional Chicago and see it through his eyes.