USA Today best-selling author Marty Wingate writes The First Edition Library series (Berkley) set in Bath, England, about the curator of a collection of books from the Golden Age of Mystery. Book one, The Bodies in the Library, 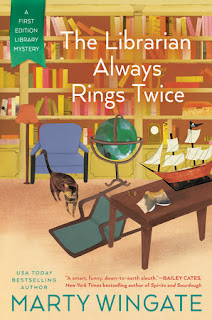 concerns murder among an Agatha Christie fan-fiction writing group, and in book two, Murder Is a Must (October 2020), an exhibition manager is found dead at the bottom of a spiral staircase.

Wingate applied the Page 69 Test to the third novel in the series, The Librarian Always Rings Twice, and reported the following:

Page 69 of The Librarian Always Rings Twice drops the reader into a scene that takes place during the second Wednesday open afternoon at the First Edition library, a well-attended event. Not only are there fans of the Golden Age of Mystery, but also board members of the First Edition Society, and curator Hayley Burke’s nemesis, Charles Henry Dill, nephew of the late Lady Fowling, founder of the Society and its library.

“He frowned at me and I frowned back. I shouldn’t leave him alone, or soon he’d be telling people the First Edition Society had been his own idea. But if I policed him, how would I talk with the real library patrons?”

The Page 69 Test works for this book amazingly well. In addition to the exchange between Hayley and Charles Henry there is brief conversation with, two of the elderly board members who ask if “that young man” will be dropping in. “That young man” refers to recent visitor John Aubrey. He claims to be the grandson of Lady Fowling, who had no children. Or did she?

Page 69 gives the reader a good idea of what’s going on in both the main and the subplot. Characters are mentioned that carry throughout the book. The scene is in the library, an integral part of the story. The murder doesn’t take place for another few pages, but this helps set the stage.

The scene is also part of a series arc: Hayley’s attempt to pump some energy into the Society and call more attention to the library. Lady Fowling died three years before book one (The Bodies in the Library) at the age of 94, and her longtime personal assistant (and now Society secretary), Mrs. Woolgar, believes nothing should change. Hayley, who may know Lady Fowling only through the stories she’s heard and the woman’s portrait on the first-floor landing, believes otherwise, but can only chip away at Mrs. Woolgar’s resistance one book at a time.

My Book, The Movie: The Librarian Always Rings Twice.