John Keyse-Walker practiced law for 30 years, representing business and individual clients, educational institutions and government entities. He is an avid salt- and 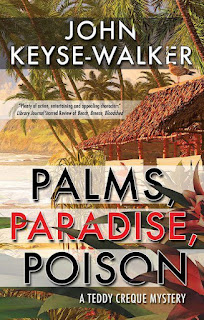 freshwater angler, a tennis player, kayaker and an accomplished cook. He lives in Ohio and Florida with his wife. Sun, Sand, Murder, the first book in the Teddy Creque mystery series, won the Minotaur Books/Mystery Writers of America First Crime Novel Award.

A freshly painted blue wooden ketch, the old retractable centerboard style like my dada used to sail, moved smoothly into view. The boat heeled over in the light breeze, its shadow visible on the bottom twenty feet down in the gin-clear sea. From where I lay in bed, I could see two figures on deck, a man and a woman. The woman reclined, trailing her hand in the water. It was hard to believe it was the same water which had roiled with hurricane ferocity a short month ago.

“Are you awake, Teddy?” Jeanne Trengrouse sighed, only half awake herself.

“Yes. Just listening to the wind.”

“I’m surprised you’re awake so early,” she said. “After your performance last night.” No more sighs now. Jeanne had that the-Devil-made-me-do-it spark in her glorious blue eyes, the eyes around which a man could make a life. The eyes of a woman around whom I had made my new life, blending my family of two children, Kevin and Tamia, with hers — her remarkable son, Jemmy, and Sir Winston Churchill, scarlet macaw and burglar-alarm-cum-doorbell.

“Since you’re not tired, come here,” she said. She pulled me against her, enveloping me in a tangle of lithe limbs and frowsy hair. Playful nipping kisses turned to passion, and we …

Well, I suspect you can guess the rest of what happens on page 69. Does it give the reader a good idea of what the entire book is about? Hardly. Page 69 is link or bridge between the action at the start of the book and the pursuit/quest which makes up the balance of the story.

The book begins with my series main character, Royal British Virgin Islands Police Constable Teddy Creque, the sole policeman on the BVI out-island of Anegada, struggling to protect his home island against a monstrous hurricane. In the course of performing a rescue of a sinking boat, he captures an escaped prisoner, the formidable Queen Ya-Ya, and places her in a cell. He leaves his side-kick and another islander to guard her while he moves on to another rescue, only to return to find Ya-Ya gone from the locked cell, her islander guard dead, and Teddy’s side-kick in a confused state and unable to explain what happened.

Page 69 only alludes this early action, instead showing the reader the peaceful domestic life which the hurricane interrupted and to which Teddy seems to have returned. But in the pages beyond 69, Teddy pursues Queen Ya-Ya to Cuba, forming an alliance with a police officer who is also a Santeria priestess, and finding himself thrust into an occult world for which he is woefully unprepared.

While it hardly gives the reader a complete sense of the story, Page 69 does give a taste of the idyllic setting of the series, and a glimpse of Teddy’s domestic life, a life he longs to live undisturbed and which forces from the outside world are always certain to disrupt.