Nick Mamatas's novels include The Last Weekend, Love is the Law, The Damned Highway with Brian Keene, Bullettime, Sensation, Under My Roof, and Move Under Ground. 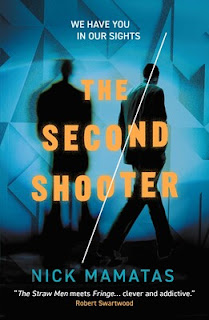 Mamatas applied the Page 69 Test to his new novel, The Second Shooter, and reported the following:

On page 69 of my speculative thriller The Second Shooter a cell phone has been hacked, conspiracy theories are bandied about across a dinner table, and an eight-year-old girl cages a sip of beer. This certainly captures the vibe of the book, which is a novel of technology, the politically eccentric and marginal, and sudden outbursts of transgression. As one character says at the very bottom of the page "It's just interesting to hear what weird people think."

The Second Shooter was a tricky book to write, as a lot of near-term science fiction is. I conceived of it before pizzagate, before Qanon, before lab leak hypotheses, and before hundreds of people lined the streets of Dallas waiting for the return of JFK Jr. from the dead. In 2016, a novel about conspiracy theories surrounding the phenomenon of the second shooter—ever notice how many early news reports of mass casualty events describe a team of two, only for it to finally be revealed that the carnage was the work of a single killer?—seemed interesting, even cool. Life got in the way and I put the 25,000 words and four-page synopsis I had down in February of 2017 to work on other projects. By the time I sold the book in early 2021, right after even simple voting became the locus of conspiracy theories, the notion was far more treacherous.

Luckily, I didn't like my synopsis anyway, so I was able to throw it away. I introduced a new subplot into the second act, one based on an infamous mass shooting event that occurred in early 2018, and I turned the third act into something far more mystical, and radical, than I'd ever could have imagined. My protagonist is a radical journalist and occasional lowlife who l designed to personify the Hunter S. Thompson maxim-cum-directive, "“When the going gets weird, the weird turn pro!”, which is pretty fun but ultimately was insufficient to carry the whole book. So while page 69 captures the vibe of the book, and the stakes of the book, it does not prepare you for the final third, at all.

But the final third of The Second Shooter may well prepare you for the next five years. Stay sharp! We have you in our sights!