"Down a Dark River"

Karen Odden received her Ph.D. in English literature from New York University and subsequently taught at the University of Wisconsin-Milwaukee. Her first novel, A Lady in the Smoke, was a USA Today bestseller, 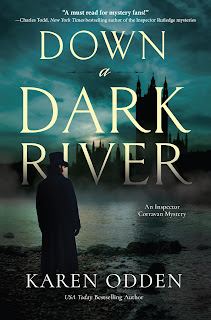 and A Dangerous Duet and A Trace of Deceit have won awards for historical mystery and historical fiction.

Odden applied the Page 69 Test to her latest mystery, Down a Dark River, and reported the following:

[I] knew it was more than fair, Ma asking me to keep Harry for a while, after she’d kept me for years. For most people in the Chapel, sleep and food and safety and work were like four aces, held close to take a fat pot in a fast-paced game. But from the first night I entered her house, Ma had made it clear that game wasn’t played at her table. She’d dealt all four aces into my palm, the same as she dealt them to Pat and Elsie and Colin, never once making me feel like she regretted taking me in, no matter how many times she had to reuse the leaves for tea. I managed a smile. “Don’t worry, Ma. I’ll figure out something.” I set aside the cup and saucer and stood to retrieve my coat from the rack.

She stood as well, looking up at me with a face full of affection. “Thank you, Mickey. I wouldn’t ask, if I could think of summat else.”

“When do you want to send him?”

“Tomorrow, around midday.” She hesitated. “Mind you, he ain’t much to look at, but he’s a good sort, once you talk to him.”

“Don’t worry, Ma,” I said again. I settled a kiss on her cheek and opened the door. “We’ll be fine.”

When I arrived back at the Yard, there was a messenger, just arrived, with a note addressed to me:

Quiet but better. Was expecting you today. James.

I heard the rebuke and let out a groan as I checked the clock. Half past six. How was it so late? And I still needed to find Anthony Thurgood at his club.

In that moment, I made a decision. The case of Madeline Beckford was officially solved; she’d been found. All that remained was to wait for her to talk. No doubt it would be best if I visited her regularly, convinced her to trust me. But with Vincent pressing me on the Albert murder, I had no time. My eyes sought Stiles. He was just the person for such a task. Pretty young maids and old harridans, they all unbent for him. James had met him several times and found him a smart, likable young man.

Obligingly, he set aside some papers and took up his coat.

Somewhat to my surprise, page 69 is remarkably representative of my book! It captures some of the core dualities and themes, for it shows Corravan in two separate “scenes”: first, visiting with Ma Doyle, his adoptive mother, in seedy, dangerous Whitechapel (representing Corravan’s past) and second, working at Scotland Yard (representing his present). The page alludes to two separate mysteries that preoccupy Corravan, mentions two different characters who are “foils” for Corravan (Harry Lish and Inspector Stiles), and illustrates several key aspects of Corravan’s character, including his tendency to take on too much and thereby disappoint people (here, James), and the compassion that Corravan learned from Ma Doyle, which will be crucial later on.

At this point in the book, Corravan’s thoughts are occupied by two different mysteries: the murder of the wealthy, young Rose Albert, who was found dead in a boat floating down the Thames, and the bizarre muteness of Madeline Beckford, whom Corravan has just rescued from a madhouse. On the top half of this page, Corravan visits with Ma Doyle, who asks him to take in her recently orphaned nephew, Harry Lish. Corravan is not paternal, but he knows what he owes Ma Doyle, and he agrees. Harry and Corravan have a good deal in common, for just as Corravan left Whitechapel thirteen years ago with next to nothing, Harry Lish leaves Whitechapel with one satchel. Like Corravan, Harry is clever, and he fiercely resents the idea of being a burden to anyone. Unlike Corravan, however, Harry has a proper education, which comes in handy later. In his role as a foil, Harry helps Corravan remember aspects of his own boyhood.

On the second half of page 69, Corravan returns to the Yard, where he receives a note from his friend Dr. James Everett that refers to Madeline Beckford, who later provides a clue that helps Corravan unravel the mystery of the murdered Rose Albert. Corravan hears “the rebuke” in James’s note, and this suggests one problem Corravan wrestles with: he tries to do too much on a given day. One lesson Corravan must learn over the course of the book is that he cannot save everyone; there are limits to what he can accomplish—and this is a truth he fiercely resists.

Coffee with a Canine: Karen Odden and Rosy.

My Book, The Movie: Down a Dark River.