Sarah Rayne is the author of many novels of psychological and supernatural suspense, including the Nell West & Michael Flint series. She lives in Staffordshire. 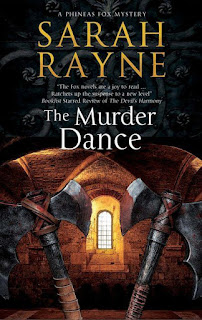 Rayne applied the Page 69 Test to The Murder Dance, the most recent novel in the Phineas Fox series, and reported the following:

‘I can’t really see what they could be a smokescreen for, though.’

‘There could be masses of things,’ said Arabella, promptly. ‘How about if Walter was storing smuggled goods – no, Reivers is a bit far from the coast for that, isn’t it? Or wait, he might have had a printing press in there and a gang of forgers working for him. Or an illicit still for brewing hooch and flogging to The Daunsen . . . Oh, and here’s a lovely one – maybe he was a member of one of those furtive organizations for assassinating kings and heads of states, or getting pretenders on to thrones. Like the Black Hand crowd who assassinated the Archduke in Sarajevo and triggered the Great War, or those earnest little groups drinking to the King over the Water and trying to restore Bonnie Prince Charlie. Or what if he was part of a Black Magic sect like that one in the nineteenth century – the Golden Dawn, was it called?– with Aleister Crowley trying to summon the devil – no, that’s a bit off the wall, isn’t it?’

Phin said, slowly, ‘How about the almshouse set-up being a cover for someone shut away in a barred room?’

Until I looked at page 69 of The Murder Dance, I hadn't realised how useful a signpost this part of the book could be.

There are, of course, points in any plot where it's helpful to give the reader an update on where the story has reached - not to mention the author, who is probably utterly confused by that time, and may well have lost the synopsis, flow chart, and chapter precis all so optimistically started around Chapter One. Not that I ever do lose such things, of course. Well, not often. Hardly ever, really.

In the case of The Murder Dance's page 69, I'd like to think the reader is being reminded that there's a sinister room tangled up in the story - a room that seems to contain all kinds of macabre secrets. Also - and this is always important - it flags up that there will be intrigue and sinister events ahead.

Phin put his arm round her. ‘It’ll probably turn out to be all perfectly ordinary and innocent,’ he said. ‘Don’t let it give you nightmares.’

‘I’ll try. But if I wake up screaming, at least you’ll be there tonight, won’t you?’

With this, the reader might get a reminder of the developing relationship between the two main protagonists in this series - Phineas Fox, the rather scholarly music researcher and historian, and the volatile and disastrously accident-prone Arabella.

With a series, it's always a difficult decision as to when - even if - you resolve what's usually called unresolved sexual tension, and allow the two major players to go happily hand-in-hand into the sunset. Because once you've done that, where do they go in future books? Do you keep them happily together, letting cosy domesticity into the plots, so that they solve murders or disinter ancient mysteries while shopping or washing up, or uncover the truth about strange legends in between choosing new bedroom curtains and worrying about the central heating boiler?

But with this snippet from the foot of page 69, I'd like to think the reader will see that Phin and Arabella's relationship is moving to a new level.