"Death under the Perseids"

Teresa Dovalpage is a college professor and author of three theater plays and twelve novels. The last four belong to the Havana Mystery series published by Soho Crime. 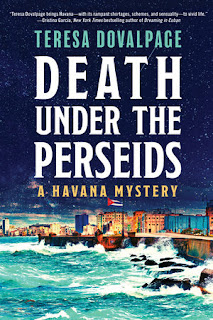 She applied the Page 69 Test to Death under the Perseids, the most recent novel in the series, and reported the following:

69 happens to be the last page (half a page, actually) of a chapter, right in the middle of a dialogue between Mercedes, the Cuban-born narrator, and literary agent-turned-writer Javier. They have just met aboard the cruise ship Narwhal, a surprise encounter for both. Last time they saw each other was nine years ago, in Cuba, when Javier announced that Las Perseidas, a novel written by Mercedes’ then boyfriend, Lorenzo, was a runner up for a prestigious literary award in Spain.

A lot has happened afterwards. Mercedes is now married to an American college professor and living in Gainesville, Florida. Lorenzo is dead. The novel has been published under Javier’s name.

“Believe me, I really wish I hadn’t—” Javier sighed. “But it is over. Lo pasado, pisado, don’t you think?”

Let bygones be bygones. Spanish is more colorful: step on the past.

The scene offers a hint about the past. Javier regrets having stolen the novel after Lorenzo’s mysterious death. Confronted by Mercedes, he admits his misdeed. But his intentions may be somewhat shady in the present too, despite his apparent remorse.

“Let’s get together again. I’d like to meet your husband.”

Maybe you already have, I thought, but didn’t say it. Why the insistence, anyway? I still didn’t trust Javier.

From that moment on, Mercedes’ suspicions continue to rise because not only Javier but also other former friends (and enemies) of Lorenzo happen to be on board too. And then, they begin to disappear…

I would say that the test works for Death under the Perseids. Readers learn about the stolen novel, which is a key element in the story. They also figure out that the action happens aboard a ship:

Before I could make any comment, an alarm went off.

“All passengers, please collect your lifejackets and proceed to your muster stations as indicated on the back of your stateroom door,” said a voice from the ship’s loudspeakers. “The mandatory safety drill will start in ten minutes.”

Something else that works well with page 69 is the interjection of Spanish phrases. This is a good indicator of what readers will find throughout the novel. Yes, there are several idioms, curses and sayings en español. I blend the two languages to reflect Mercedes’ inner world. And to add sandunga.

Don’t worry, though. Like in the example above, explanations follow in English so they can be easily understood.