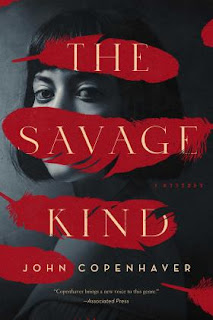 Barry, and Lambda Literary Award nominations. Copenhaver writes a crime fiction review column for Lambda Literary called “Blacklight,” cohosts on the House of Mystery Radio Show, and is the six-time recipient of Artist Fellowships from the D.C. Commission on the Arts and Humanities. He has taught high school English for nearly twenty years. He grew up in the mountains of southwestern Virginia and currently lives in Richmond, VA, with his husband, artist Jeffery Paul (Herrity).

Copenhaver applied the Page 69 Test to his new novel, The Savage Kind, and reported the following:

Judy and I agreed to meet up after school. We needed to make a plan to investigate what happened to Miss Martins. So, there I was, scanning Horsfield’s malt shop for her, peering in through the O in the red-enameled script that swept across its wide plate glass window. I felt jittery, nervous that I’d witnessed too much at Miss Martins’s apartment and said too much to Judy about it. This afternoon—and still now—my loyalties are strained, even divided, not that I’m somehow beholden to Miss Martins and not that Judy doesn’t deserve to know. In truth, I’m not sure what I actually saw, but it felt intimate, and I can’t shake the feeling that I’ve done something to add to Miss Martins’s pain.

Frankly, I’m amazed at how well the page 69 test works for this novel.

After shifting away from Judy’s point of view, Philippa, one of my two main characters, reflects on a disturbing scene that she witnessed involving her beloved English teacher, Miss Martins. Her teacher loaned her a pulp mystery and asked that she return it to her home. They live in the same neighborhood. When she arrives at Miss Martins’s apartment, the door is ajar. Being curious and not wanting to disappoint her teacher, who she has a crush on, she enters, only to discover her poised and self-possessed teacher being assaulted by a mysterious man in the shadows. Shocked, she falters, drops the book, and flees.

As she reflects on the event with her best friend, the world-weary and cynical Judy, she’s not sure what she’s seen. Her sexual naivety and latent feelings of same-sex attraction to her teacher muddy her perceptual waters. Has she witnessed a horrible sexual assault or rough consensual sex or something else entirely? Soon after, a classmate, Cleveland Closs, is murdered, his body washes up on the shore of the Anacostia River, and the girls begin to believe that there’s a connection between the events. The question of what she witnessed in Miss Martins’s apartment hovers over the novel, as does the theme of the slipperiness of interpretation.

This page 69 passage also suggests the close and complicated bond between Philippa and Judy. They’re beginning their journey as an amateur crime-solving team, but Philippa already doubts whether she should trust Judy. Had she “said too much” to her about what she’d witnessed? If readers were to dip into the novel at this point, they would get a sense of the relationship dynamic and, of course, a central question of the mystery. So, indeed, this test works well for The Savage Kind.