Kimberly Belle is the USA Today and internationally bestselling author of seven novels, including the newly released My Darling Husband and The Marriage Lie, 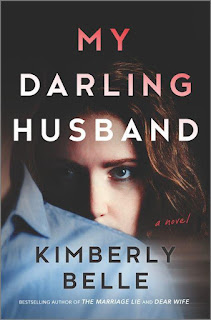 a Goodreads Choice Awards semifinalist for Best Mystery & Thriller. Her books have been published in more than in a dozen languages and have been optioned for film and television. A graduate of Agnes Scott College, Belle divides her time between Atlanta and Amsterdam.

She applied the Page 69 Test to My Darling Husband and reported the following:

“Come on, Baxter.” I toss the cell to the marble and gesture with my gun—a warning, a promise. He’s sucking hard on a thumb, his smooth cheeks puffing and pulling. I smile to calm his nerves. “Get on over here, son. I need you to do something for me.”

Jade’s gaze sticks to the gun like superglue. “At least let me come with him.”

“But Baxter’s only six.”

“Exactly. Plenty old enough to help me out.”

She shakes her head hard enough that her hair whacks her in the face. “But he’s terrified. I’m terrified.” Her voice cracks, and she’s trying really hard not to cry.

“What do you think’s going to happen? What are you so scared of?”

She gives me an incredulous look, searching for words she can say out loud. Without turning her head, she darts a side-long glance at her daughter, her expression sparkling with meaning. Little pitchers have big ears—and Beatrix’s are practically flapping off her head. This is a kid who knows when to listen.

“I just...” Jade’s voice is a soft squeak. She takes a big breath, swallows. “I don’t want anything to happen to him.”

Pretty sure this is the first time the Page 69 test has worked so perfectly to capture the essence of the story in one of my novels. In My Darling Husband, Jade’s world is tipped upside down when she and her two small children are confronted by a masked and armed home invader who forces his way inside. This scene takes place in the kitchen—before the man ties Jade to a chair upstairs, before he ties up the children in a separate room across the hall, before he forces Jade to call her husband and demand a strangely specific ransom: $734,296.

Through scenes like this one on page 69, Jade learns that the invader is smart, and he’s sneaky, and above all he’s manipulative, not above using her children to fluster and frighten Jade. But why has this man targeted their home? How does he know so much about Jade and her family, and what’s up with that ransom sum? From here on in, Jade slowly comes to the realization that this kidnapping was anything but random.

Because this scene so perfectly captures the fear and helplessness Jade feels throughout the entire story, I’d say yes—My Darling Husband passes the page 69 test brilliantly.