Catherine Ryan Hyde is the author of more than 40 published and forthcoming books. 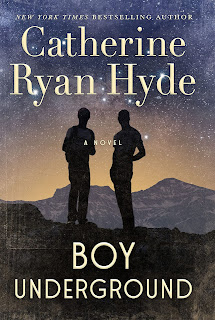 She applied the Page 69 Test to her new novel, Boy Underground, and reported the following:

The mountains looked spooky to me, like a place I would never dare go. I remembered having camped up there. I just couldn’t remember how I’d gotten so brave.

I stopped. Panted. Placed my hand on the knob and threw the door open, stepping inside.

The trap door into the root cellar was standing open.

I climbed down the steep ladder steps, leaving the heavy load up above.

I could see Nick’s sleeping bag and pad spread out on the dirt, but empty. I felt around a little in the dark.

But Nick wasn’t there.

My heart began to hammer in my chest, wondering what had happened to him. I tried to convince myself that he had just stepped away from the cellar to relieve himself, but my mind filled with horrible thoughts. What if he had been discovered? Arrested? What if he had run away for real?

I climbed up the stairs and stepped outside. Looked around as much as I could in the moonlight. All I could see was flat, dusty land.

Then I felt a hand on my shoulder, and I let loose a shriek. I couldn’t help it. It was like having something jump out at you in a haunted house. I was primed to be startled.

Good thing we were a long way from the house.

“Shhh,” a voice said. I could hear that it was Nick.

I breathed for what felt like the first time in a long time.

I like page 69 of Boy Underground reasonably well for this test. The fact that Steven is hiding Nick, whom he is also falling in love with, is pretty key to the story. It hints at the fact that Nick is evading arrest. Though it doesn’t say so straight out on this page, if Nick is arrested, Steven will be arrested for hiding him. So you can feel the stakes of the thing pretty well. And the snapshot of Steven, terrified by what he’s doing but doing it anyway, runs pretty true to form.

So if a reader is going to open to one page, I would say page 69 is a reasonably good one.

But, of course, the book is about much more. It’s about the fact that the Japanese have just bombed Pearl Harbor, and one of the four friends is 17 and about to enlist. And Steven’s brother is about to turn 18, and will be inducted. And another of the four best friends is a Japanese boy who will soon be interned at Manzanar with his family. It’s a very bad time to be Japanese, and not a great time to be gay, especially in a small California farming town. On top of all of that, Steven is the son of a relatively wealthy land owner, and his friends are sons of field workers. And his mother has told him more than once to choose his friends carefully. And even at age 14, Steven has a pretty good idea what that means.

Oh, and before it’s all over we get to check in on how the friends are doing at age 94.

So hopefully that gives you a brief idea of what I do with some of the non-69 pages.