"You Can Never Tell"

Sarah D. Warburton lives in the mountains of Southwest Virginia. For ten years she was the lead writer for the monthly magazine UpClose. She has 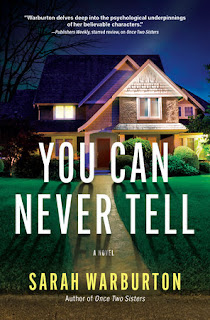 studied writing with Pam Houston at the Taos Writers Workshop and with Justin Cronin in Houston. Her work has appeared in the Southern Arts Journal, Women on Writing, Embark Literary Magazine, and Oyster River Pages.

Warburton's first novel, Once Two Sisters, was a Publishers Weekly pick of the week, a Crimereads recommended debut, and a PopSugar featured title.

Warburton applied the Page 69 Test to her latest novel, You Can Never Tell, and reported the following:

The women all exchanged a little smile that made me feel stupid, and then Rebecca said, “These women—-and Alondra, especially Alondra—-are extremely talented at getting donations.”

“But it’s a good question.” Elizabeth’s tone was a little too sharp, and Rebecca’s eyes widened in surprise.

Mina jumped in. “But the better question — more fun at least — is the theme.”

Surely it wasn’t my imagination that Elizabeth seemed on edge around Rebecca? But Mina spoke rapidly, throwing out fantastical ideas from Carnivale to a Time Traveler’s Ball.

We all were laughing at the idea of a junior-prom theme, when another woman, tall with a round face and blunt-cut bob strode purposefully through the restaurant. She dropped into the chair beside me and held out her hand. “Hi. Alondra.”

Surprised, I put my own hand into hers for a brisk shake, as she looked around the table. “Thanks for meeting downtown, ladies. I know it’s a little out of your way. Catch me up.”

Alondra sipped her iced tea, made a face, and flagged a waiter. “I’d like a water without ice or lemon, and a Whitmeyer’s single barrel neat.” Then she glanced around the table and arched an eyebrow as if to ask am I drinking alone?

On page 69 Kacy is at lunch with Elizabeth, Rachael, and Inés. From the very first line Kacy feels like an outsider. She wants to keep her past a secret, she’s been burned by a previous friend, and this is her first real foray into social life. This page definitely hits the “suburban secrets” part of the novel. Kacy’s desperate to keep her past a secret. And we get a hint that poised and polished Elizabeth has a secret too in the way she’s on edge around Rachael. Alondra’s arrival is an important moment. Alondra’s confidence is a contrast to Kacy’s current state of mind, and her profession—criminal defense attorney—will be crucial for Kacy in the future. This page in isolation gives a very different version of the book that some other pages. There’s a stark contrast between this polished society where the biggest stakes are the agonizing flush of social humiliation and the life and death danger in which Kacy will find herself. On the previous page Rachel and Inés were gossiping about an abandoned car they’d seen. They’d just learned the drivers were found murdered in the swamps. And on the following page Kacy’s fears are worsened when Alondra interrogates her. Page 69 is a bridge between these two competing tensions. From the first page of the novel, we know Kacy’s living through a “true crime” experience, but at this point she still thinks the worst things that will happen are social embarrassment and isolation.

My Book, The Movie: You Can Never Tell.