Megan Collins is the author of The Winter Sister and Behind the Red Door. She received her B.A. in English and Creative Writing from Wheaton College in Norton, 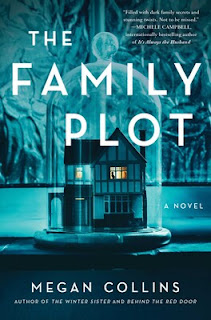 Massachusetts, and she holds an M.F.A. in Creative Writing from Boston University, where she was a teaching fellow. She has taught creative writing at the Greater Hartford Academy of the Arts and Central Connecticut State University, and she is Managing Editor of 3Elements Review. A Pushcart Prize and two-time Best of the Net nominee, her work has appeared in many print and online journals, including Compose, Linebreak, Off the Coast, Spillway, Tinderbox Poetry Journal, and Rattle. She lives in Connecticut.

Collins applied the Page 69 Test to her new novel, The Family Plot, and reported the following:

On page 69 of The Family Plot, thirty-six-year-old Charlie Lighthouse barges in to a room where a detective is interviewing Charlie’s sister—the book’s narrator, twenty-six-year-old Dahlia—after the discovery that her twin brother, Andy, was murdered. Dahlia and Elijah, the detective, are conducting their interview in “the victim room,” dubbed so by the Lighthouse family because it’s where they display their newspapers and books about true crime.

The door gives way, and Charlie barrels through. His hair is tousled, face red, and he has a streak of dirt on his sweater.

Charlie smirks as he heads for the shelves. Running his hands over the newspaper folds, he plucks some out, letting them fall to his feet. Soon, the floor looks carpeted in black and white.

“What are you doing?” I ask, and I can’t help the shrillness in my voice. I see flashes of victim names—JonBenét Ramsey, Christopher Byers—as he plucks and drops, plucks and drops. This isn’t how Mom taught us to handle the papers; she always warned us to be careful with the pages, make sure our hands were clean and the corners never bent. Then again, Charlie often flouted Mom’s wishes when it came to respecting victims—goofing off during Honorings, wagging his candle in the air instead of holding it solemn and straight. Andy and I giggled at it then, but now, seeing those murdered people tossed so casually to the floor, my chest feels tight.

“I’m pulling out options for the LMM,” Charlie replies.

Charlie stops, head turned over his shoulder to strike me with a mock scowl. “You didn’t tell him, Dahlia?” He spins around, rubbing his hands together. “The Lighthouse Memorial Museum. In honor of our brother and father. Tate will debut a new diorama, we’ll be—”

“A diorama of what?” Elijah interrupts.

Elijah gives me a curious look before returning to his notes.

I’m actually a little creeped out by how perfectly the Page 69 Test works for this book! There is so much about the story and its characters that’s shown or alluded to here, from the Lighthouse family’s strange traditions (the newspapers in the victim room; the ceremonies in which they honored victims of murder on the anniversaries of their deaths), to the kinds of people Dahlia’s siblings grew up to be: Charlie with his smirks and swagger and dark humor; Tate with her crime scene dioramas, which she exhibits on Instagram to an impressive following. The passage also hints at how Dahlia feels about Charlie throughout much of the book: appalled and distrusting.

But most apparent on this page is an introduction to the Lighthouse Memorial Museum, an event that Charlie is curating to honor the dead in their family while showcasing “artifacts” of the Lighthouse siblings’ childhood. He claims it’s a way to show the people who have always misunderstood and gossiped about them—going so far as to refer to their house as “Murder Mansion”—that the Lighthouses are, in fact, human; that their lifestyle was unusual, yes, but ultimately harmless. But the fact that Charlie throws himself into this project, almost immediately upon learning of his brother’s murder, disturbs and unsettles Dahlia, prompting her to spend less time with her family and more time figuring out what happened to her twin.