Joanna Schaffhausen wields a mean scalpel, skills she developed in her years studying neuroscience. She has a doctorate in psychology, which reflects her 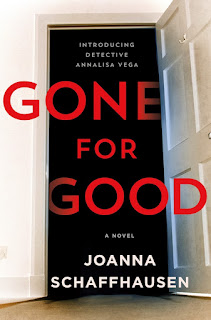 long-standing interest in the brain―how it develops and the many ways it can go wrong. Previously, she worked as a scientific editor in the field of drug development. Prior to that, she was an editorial producer for ABC News, writing for programs such as World News Tonight, Good Morning America, and 20/20. She lives in the Boston area with her husband, daughter, and an obstreperous basset hound named Winston.

Schaffhausen applied the Page 69 Test to her new novel, Gone for Good, and reported the following:

Page 69 does not do to a lot to advance the “A” plot, which involves the effort to track down a serial killer who went dormant twenty years earlier. The amateur sleuth, Grace Harper, was part of a group calling themselves “The Grave Diggers” because they pursued cold cases that the police failed to solve. Grace set her sights on The Lovelorn Killer, and she may have figured out how to find him because she ended up dead, strangled in the same ritual fashion as the original victims. Detective Annalisa Vega is now talking to other members of the group to see what Grace might have turned up in her search.

Page 69 instead leans into the “B” plot of Annalisa’s search for home and family.

Despite her rough personal history with it, Wicker Park remained one of Annalisa’s favorite areas of the city, thanks partly to its booming restaurant business. Whatever you were hungry for, whether it was fine dining with starched napkins or a grungy bar with greasy burgers, you could find it in Wicker Park. She loved the Middle Eastern food at Sultan’s Market, fresh sushi at Enso, carnitas tacos at Big Star, and a big steaming bowl of ramen at Furious Spoon. When she did venture out on a rare date, she often suggested drinks at the Robey hotel. The art deco–style Coyote Building gave sweeping views of the city that guaranteed that the evening would rate at least a 9/10, even if the guy turned out to be a total zero.

“Chris Colburn has a nicer place than we did,” Nick remarked as they rolled up in front of his building.

“Sewer rats have a nicer place than we did,” she replied.

Annalisa’s lived in Chicago all her life, rarely venturing beyond its borders, and it’s part of what says “home” to her—even as her first love, Colin, travels the world. Now she’s working the Lovelorn case alongside her ex-husband, Nick Carelli, a reminder that she’s still single after all these years apart. She loves her city and her large, close-knit family, and she’s impatient to put down roots of her own.

My Book, The Movie: Gone for Good.