Kelly Creagh is the author of the Nevermore Trilogy, Nickolas Claus and other books filled with darkness and light. Her stories often explore themes of duality, the 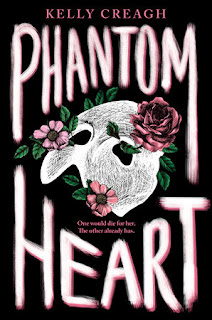 shadow self and heroes (and villains) who find themselves battling their own psyches. Creagh's major literary influences include Edgar Allan Poe, Charles Dickens, Gaston Leroux, Susan Kay, J.K. Rowling, Robin McKinley, Stephen King, C.S. Lewis, Robert Louis Stevenson, Lewis Carroll, Libba Bray, Holly Black and too many more to name. She holds a Bachelor of Science in Theatre Arts and a Master of Fine Arts in Writing for Children and Young Adults.

Creagh applied the Page 69 Test to her new novel, Phantom Heart, and reported the following:

By page 69 of Phantom Heart, seventeen-year-old skeptic Stephanie Armand has experienced enough strangeness in her new house—a crumbling Victorian mansion named Moldavia—to begin to reexamine her disbelief in the paranormal and seek further information regarding the home’s history. This leads her to Lucas Cheney, the hot, vintage-wardrobe-wearing boy from school who seems to know something about the creepy house her father is hoping to flip. What Stephanie doesn’t bargain for when she joins Lucas at his cafeteria table is an impromptu meeting with the entire paranormal research team he happens to belong to. In this scene, Stephanie is not only pitched into the thick of a tight-knit group of ghost hunters who operate semi-professionally under the name SPOoKy (Scientific Paranormal Organization of Kentucky) but she also begins to learn more about the notorious masked entity supposedly stalking the halls of Moldavia. Though Stephanie is eager to garner as much information from Lucas and his friends as possible, she quickly finds herself caught between personalities, opinions, jokes, and banter. She might also be the target of a bit of jealousy. Also, her attraction for the strapping, suspenders-clad Lucas who claims only to be interested in her house is growing.

If readers flipped to page 69 of Phantom Heart, I think they would indeed get a good feel for the overarching story of the book, which centers around the strange presence in Stephanie’s home. Her sudden appearance at the SPOoKy lunch table sparks debate, argument, speculation, and fear surrounding this ominous figure known as “Zedok.” Stephanie’s questions also stir up information regarding the involvement of a famed celebrity medium, Rastin Shirazi, and the controversial episode of a TV show he filmed in her home with another paranormal investigator who died mysteriously after recording.

While the troubling and even outright terrifying information that Stephanie gathers from SPOoKy aligns with the unnerving experiences her six-year-old sister Charlie has been reporting, the revelations are slightly at odds with her own experience. In fact, the catalyst for Stephanie’s appearance at Lucas’s lunch table had been the previous night’s dream, in which a gorgeous young man resplendent in Victorian garb appeared to warn her about the dark entity haunting her home. The boy, who introduced himself as Erik, wants Stephanie to leave Moldavia as soon as possible. On page 69, Stephanie is granted evidence as to why Erik’s advice is sage. And yet, there’s something about the dashing British boy from her dream that suggests there’s more going on in Moldavia than just the dark influence of a malevolent spirit. Whatever this something is, it tugs at her innate sense of curiosity. All while something about Erik tugs at her deeper desires.

The reason page 69 does provide a great snapshot of the novel, is that it captures the story’s essence. Like this moment, Phantom Heart is imbued with a little bit of everything—horror, romance, humor, tragedy, and plenty of heart. Not only that, but as he does throughout the novel, my phantom lurks covertly on the page, a larger-than-life presence with secrets to spare. The truth about him is murky, hidden, and dark. Zedok insists on hiding. He is not present in this scene and yet, he is, hidden behind a mask that, in this instance, is more metaphorical, though he possesses plenty of literal ones as well. Who is this “ghost,” this “phantom” really? On page 69, that remains unclear. What does become clear, though, is Stephanie’s ironclad determination to find out.