Robyn Harding is the author of numerous books, including the international bestseller The Party, and The Swap, which was an instant #1 Globe and Mail (Toronto) 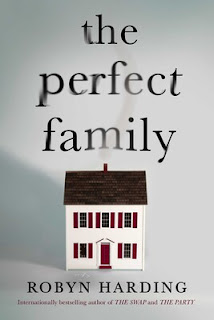 and #1 Toronto Star bestseller. She has also written and executive produced an independent film. She lives in Vancouver, BC, with her family.

Harding applied the Page 69 Test to her new novel, The Perfect Family, and reported the following:

My dad was in a good mood at dinner. He’d picked up pizza on his way home from wherever he’d been. I thought maybe it was a celebration for my new job, but apparently my mom just didn’t feel like cooking. The news was on TV as we ate. My parents kept up a running commentary on the stories of the day, moaning about politicians and policies while my sister and I chewed in silence. No one mentioned that tomorrow was my first shift at the Thirsty Raven. Not until the end of the meal when I excused myself.

“Will you be home for dinner tomorrow night?” Mom asked, stacking the plates.

“No. My training shift starts at four.”

“Here.” My dad handed me the pile of dirty plates. “Your first training shift.”

From anyone else, it might have been funny. From him, it was condescending and belittling. I stomped to the sink and dumped the dishes, then headed up to my room. Behind me I heard Dad say, “What? It was a joke.”

If a potential reader were to pick up The Perfect Family and turn to page 69, they would get an excellent snapshot of this novel. On page 69, the Adler family is sitting down to a family meal of takeout pizza. The parents are distracted by the news on the TV, and both kids eat in silence. Their son, Eli, stews about his new job – specifically, his parents lack of acknowledgement of it. He’s just been hired as a busboy at a nearby gastropub and his parents are less than impressed. They’d prefer Eli had an internship at a bank or a brokerage firm, something they could brag about to their friends. When the subject of the job finally comes up, Eli’s dad makes a joke of it, which feeds into the boy’s simmering resentment. As he storms up to his room, the reader can safely assume that Eli’s anger is just the beginning of problems to come.

I have tried the page 69 test with some of my other novels and it hasn’t been indicative of the overall theme, but in this case, it nails it! While this page focuses on the tensions between father and son, the overall picture is of a family keeping up appearances. They eat together, but don’t speak, don’t connect, and most of all, don’t share their secrets. And that secrecy is going to turn deadly.