"Let's Get Back to the Party"

Zak Salih earned his BA in English and Journalism from James Madison University, and his MA in English from the University of Virginia. His fiction 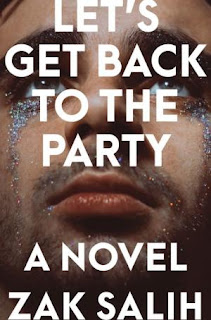 and nonfiction have appeared in Foglifter, Epiphany, Crazyhorse, The Florida Review, The Chattahoochee Review, The Millions, Apogee Journal, Kenyon Review Online, the Los Angeles Review of Books, and other publications. Let's Get Back to the Party is his debut novel. He lives in Washington, D.C.

Salih applied the Page 69 Test to Let's Get Back to the Party and reported the following:

My debut novel, Let’s Get Back to the Party, is strung between two wildly different narrators who speak in two wildly different voices. Page 69 belongs to Sebastian Mote, a high-school teacher in his mid-thirties. Befitting someone trapped in the past, bricking himself in with his memories and regrets, he speaks in uninterrupted chunks of text. Here is page 69 of the novel, from the first complete sentence to the last:

Arthur threw ideas out for social media pages, for a charter, for a bake sale. I watched him move effortlessly among the students, listened to him talk as if he’d been at this school his entire life. The uncanny confidence he took in his own body, his own identity, only heightened the awkwardness of the other kids in the room. It brought into relief my own high-school days, an adolescence spent hovering below the surface of the social waters, too quiet to be popular—or to be bullied. Of course, I didn’t need peers to bully me at that age. I had myself: a bully I couldn’t escape; a bully I slept with, showered with, ate meals with. A bully who was less a person and more a heavy wool blanket, thick and itchy, suppressing feelings I wanted to feel but also keeping them safe from daylight. Watching Arthur move about the room, watching the others gravitate toward him, I felt a profound sense of loss for my own boyhood. To have been out, to have been comfortable with myself as a teenager, to have talked freely about my identity. God, how that would have changed things! How much more powerful, how much less brooding, I could have been! How much more proud! Only after the meeting ended, as I watched Arthur at the head of the group leaving my trailer, did I realize no one said anything about Thomas Pitt.

A few weeks later, Dani joined me on one of my regular after-school walks around Lake Mortimer. At one point, she turned to me and, wind whipping her black hair in my face, asked if I was ready to start dating again. I asked her if she knew anything about Arthur Ayer. Had him for geometry for a week, she said. Then he transferred up to trig. He’s pretty astute. Scholarly. He’s going to go places. He’s been coming to our LGBT group meetings, I said. Pretty much taking it over from me.

It’s a happy coincidence that page 69 captures so well one of the many thematic through-lines I tried to bring to life in the novel: the incredible gaps of experience between gay men of particular generations. Sebastian came of age in the early 1990s, well before the increased social visibility and acceptance enjoyed by his student, Arthur (who “takes over” the LGBT social group Sebastian’s in charge of overseeing at his school). The result is the “profound sense of loss” for experiences Sebastian was unable to have; a sort of existential FOMO that drives so much of his journey (as well as that of his counterpart, the fiery and irate Oscar Burnham). The regret, the envy for what could have been instead of the acceptance of what is, will lead Sebastian to make stupid—but, I would argue, necessary—choices in an effort to come to terms with his own niche in the span of gay communal history.