"A Scone of Contention" 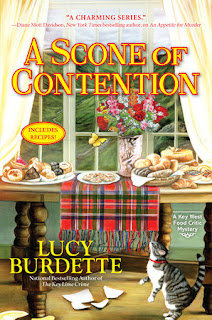 including the golf lover’s mystery series and the advice column mysteries.

Her books and stories have been shortlisted for Agatha, Anthony, and Macavity awards.

Burdette applied the Page 69 Test to A Scone of Contention, the new Key West Food Critic Mystery, and reported the following:

“At least this time it’s not my job to sort it out. Isn’t this supposed to be a honeymoon?” He sighed. “Finally, the ambulance came and carried her off. I hate that my sister is a wreck over it. And so of course is her friend Ainsley because it was her house and her dinner party. And her chef and her food.”

He burrowed down beneath the comforter and pulled me closer. “And apparently Mr. Gavin has a direct line to the chief inspector who promised to send someone over instantly. At that point, Vera and I were dismissed. We may all be questioned again tomorrow if it turns out that they suspect foul play. Let’s not talk about it anymore tonight, okay? I can’t believe I’m playing in a golf tournament in the morning.” He groaned. “Whose idea was it to come to Scotland anyway?”

Within seconds, his breathing grew slow and easy as he dropped off to sleep. I lay awake for much longer, puzzling over the possible poisoning incident. Had I seen anything that was off-kilter in the kitchen? I had been so distracted by Gavin’s buffoonery that I’d noticed nothing out of order at Glenda’s end of the table. I also thought about Nathan’s sister. True, she seemed very much wound up about her project. I liked her very much, but I hadn’t spent enough time with her yet to get a sense of whether she was really anxious about something she interpreted as threatening, or whether the men around her simply couldn’t handle her being emotional and having strong opinions. Either was possible.

I stretched the rules a little and added a tiny bit of page 68 since page 69 began in the middle of a paragraph. Food critic Hayley Snow and her detective husband Nathan Bransford have traveled to Scotland for their so-called honeymoon. So-called because they've included their octogenarian neighbor Miss Gloria. Plus they are staying with Nathan's sister and brother-in-law and his intimidating mother has invited herself along, too. And to make matters worse, the brother-in-law has signed Nathan up for a multi-day golf tournament while the ladies accompany his sister Vera on a work trip to visit "thin" places in Scotland. This page was written after an apparent poisoning at a fancy dinner replete with golfers and Vera's squabbling co-workers. Nathan and Hayley are finally alone together after the terrifying incident at the dinner table.

I'm pretty pleased with this page as a taste test for the novel. The reader gets an idea about what the characters are doing in Scotland, how I the writer conspired to separate Hayley and her husband (necessary because he wouldn't want her investigating and putting herself in danger,) and what the first major disaster will be. I hope it also shows both some of Hayley's inquisitive and caring character, and her relationship with her new husband. I've often heard teachers tell writers that every scene should reveal character, advance the plot, or both. Hopefully this page does both!

The Page 69 Test: An Appetite For Murder.