A physicist and computer scientist, Edward M. Lerner toiled in the vineyards of high tech for thirty years, as everything from engineer to senior vice president. Then he began writing full time. 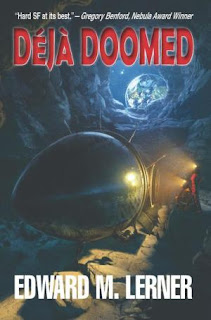 His novels run the gamut from near-future technothrillers, like Small Miracles and Energized, to traditional SF, like the InterstellarNet series and Dark Secret. Collaborating with New York Times bestselling author Larry Niven, Lerner also wrote the Fleet of Worlds series of Ringworld companion novels. Much of Lerner's short fiction has been collected in Creative Destruction and Countdown to Armageddon / A Stranger in Paradise. His nonfiction articles on science and technology centerpiece Frontiers of Space, Time, and Thought: Essays and Stories on The Big Questions.

Lerner applied the Page 69 Test to his new novel, Déjà Doomed, and reported the following:

This page concludes a chapter, so it’s better to offer context and summarize than merely to quote.

By this point in the novel, we’ve been introduced to Russian and American groups newly at work on the Moon. A small American team has been drafted to investigate—in total secrecy—suspected ancient alien relics. On page 69, an undercover FSB agent embedded in the Russian lunar contingent struggles to understand the Americans’ sudden—and implausibly explained—excursion far from their under-construction base. And that agent very cleverly deduces the CIA must be up to something it really doesn’t want anyone else to know….

Would this page give the reader a good idea of the work?

Page 69 shows the spy-vs.-spy aspect of the novel—without any hint of the alien elements soon to follow. Beyond a single-word mention of “Farside” (likely cryptic out of context), nothing on the page suggests that the scene is set on the Moon, much less any of several other settings, some exotic, of the novel.

You might suspect that nothing good can come of poking around ancient alien relics—even if the novel’s title weren’t Déjà Doomed. And you’d be right.

Okay, that teaser might suggest this is a horror novel. It’s not, although there’s the almost certain likelihood of a horrible outcome. It’s most definitely science fiction. The space-based parts of the novel draw extensively from the Apollo experience, recent NASA plans for a return to the Moon, and the evolving capabilities of such private aerospace companies as SpaceX. As for any clarification of the doom part of the title, readers will thank me for not being too specific today.

Learn more about the author and his work at his website.

My Book, The Movie: Déjà Doomed.