Lindsay Cameron worked as a corporate lawyer for many years in Vancouver and New York City before leaving the law behind to write books. Her first novel, Biglaw, 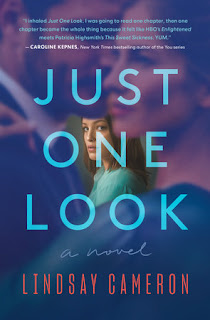 was published in 2015. Just One Look is her suspense debut. She lives in New York City where she is currently at work on her next book.

Cameron applied the Page 69 Test to Just One Look and reported the following:

In Just One Look, a young lawyer named Cassie Woodson has suffered an epic tumble down the corporate ladder. While working at her demoralizing temp job, she comes across the private emails of a partner at the firm, Forest Watts, and his wife, Annabelle. Cassie knows she shouldn’t read them, but she can’t look away. Intrigued by their seemingly perfect life, Cassie falls down an internet rabbit hole, gathering information about this enchanting couple that seems to have everything she’s missing in her own life.

I could probably find my way through the inside of their house if I wanted to. I’d studied the floor plans and cross-referenced them with Annabelle’s Instagram photos. My favorite room, hands down, had to be the elegant dining room with the gilt chandelier and two-sided fireplace. It was the perfect mix of modern and traditional, just like them. And a far cry from the particleboard Ikea coffee table I ate off of in my apartment. Of course, I wasn’t going to go inside their home. Not today.

This is my first time doing the Page 69 test and I’m surprised by how well it worked! No longer satisfied by admiring Forest and Annabelle from behind a computer screen, Cassie is taking her preoccupation up a notch in this scene. She’s taken a train out to Westchester in hopes of getting a glimpse of the captivating couple in their stately home. Thanks to her meticulous research, she knows everything there is to know about Forest and Annabelle. Or so she thinks. Readers turning to page 69 would be able to get a sense of Cassie’s escalating obsession as well as her deep seeded envy and desire to have the kind of life Annabelle is leading. The last sentence in the passage let’s readers know that Cassie’s need to connect with the couple will ratchet up, leading her down a dangerous path.