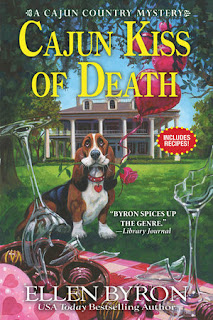 She also writes The Catering Hall Mysteries (under the pen name Maria DiRico), and will launch the Vintage Cookbook Mysteries (as Ellen) in June 2022.

Byron’s TV credits include Wings, Just Shoot Me, and Fairly OddParents. She’s written over 200 national magazine articles, and her published plays include the award-winning Graceland. She also worked as a cater-waiter for the legendary Martha Stewart, a credit she never tires of sharing.

A native New Yorker who attended Tulane University, Byron lives in Los Angeles with her husband, daughter, and rescue chi mix, Pogo. She still misses her hometown - and still drives like a New York cabbie.

Byron applied the Page 69 Test to her new Cajun Country Mystery, Cajun Kiss of Death, and reported the following:

“If I can find parking,” Bo muttered. Cars lined the road on both sides, while crowds gathered on top of the levee. A party energy filled the air. Music blared from speakers a group of tailgaters had set up. They raised their bottles to Maggie and Bo and whoo-hooed. “I’ll be holding a breathalyzer to that crew.”

Maggie looked back at the group. “I think that last ‘whoo hoo’ came from police chief Rufus.”

“I’m gonna let y’all out and find a space,” Bo said. “Text me where you end up and I’ll meet you there.”

Bo pulled over. Maggie helped Xander and Esme hop down from the SUV, then Bo drove off. She took each child by the hand and led them across the street. Esme literally bounced with excitement, hopping instead of walking to the levee side of the road. On the top of the levee, Maggie recognized Vanessa’s zaftig silhouette, made more so by her baby bump. Maggie led the kids to Vanessa’s crew of Fais Dough Dough and Bon Bon employees, waving to Gaynell, who was leading the Gator Girls in an energic rendition of Allons a Lafayette. “I didn’t know the Gator Girls were performing tonight,” Maggie said to Vanessa when they finally reached her group.

Does page 69 give a reader a good sense of the book?

Hmm… I would have to say, maybe not so much. It certainly gives the flavor of Cajun Country and clues the reader in to a pivotal event in the story. But there’s no sense of foreboding or suspense in the page. There will be on page 70, lol. But this page is about setting the stage for the dire event about to take place. It does focus on our protagonist, Maggie Crozat, and there’s humor on the page, which is indicative of the book’s tone.

But while there’s humor in Cajun Kiss of Death – a senior citizen talent show organized by Maggie’s grand-mere being the prime example – it’s balanced with mystery and drama. A show-boating chef comes to town and his new restaurant threatens the very existence of local eatery favorites run by people Maggie cares about, like close friend JJ, who becomes the prime suspect in the chef’s murder. Meanwhile, Maggie suffers a career crisis that makes her question her future. As if those major plot points aren’t enough, the joy of Maggie’s first Valentine’s Day as a newlywed is threatened by a series of anonymous gifts that offer increasing evidence that she has a stalker.

Weaving together all these story elements was a fabulous challenge and I’m excited to share the results with readers.

Coffee with a Canine: Ellen Byron & Wiley and Pogo.

My Book, The Movie: Cajun Kiss of Death.