Ally Malinenko is a poet, novelist, and librarian living in Brooklyn, New York, where she pens her tales in a secret writing closet before dawn each day. 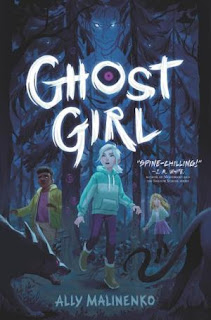 Malinenko applied the Page 69 Test to her new novel, Ghost Girl, and reported the following:

By page 69 a giant storm has blown through Knobb's Ferry, uprooting trees, and turning the streets to mud. Even worse, people are missing. But our main character Zee has issues of her own to worry about. She has already had at least one run in with a ghost, gotten into a fist fight with her bully, been spooked by a red-eyed dog in the cemetery, and worst of all grounded by her big sister. No books. (gasp!) No best friend Elijah. Needless to say, Zee is not feeling great about things. Since one of the people missing was the old principal, the elementary school has put together an assembly for the schoolchildren to meet their new principal. Normally Zee would find all this rah-rah school spirit boring but surprise, surprise, the man that saunters in is unlike anything Zee has ever seen before. And this new principal is about to turn Knobb’s Ferry on its head - in the worst way possible.

The double wide doors to the gymnasium flew open with a bang, causing a collective gasp among the students. Through the doors came a man unlike anyone Zee had ever seen. He was tall and thin, ghostly pale, with slicked-back hair. He was clean-shaven with a youthful face, and he wore dark sunglasses. He was dressed in head-to-toe black: black shirt, black pants, black jacket. The only spot of color came from his right hand, on which he wore a red glove. He walked like a cowboy, like a gunslinger, his boot heels clicking across the gymnasium floor.

He didn’t go to the podium or shake Mr. Houston’s hand. He strode right past Zee’s history teacher until he was standing directly in front of the gathered schoolchildren. There was a beat. And then another. He gazed out at the children, and she could see their rows reflected in his sunglasses. The tension was so thick Zee thought if someone didn’t say something she was going to scream.

“Do you love me?” he asked, arms raised.

I actually laughed when I turned to page 69 and saw that it was in fact a pivotal moment in the book! This test, for me, was spot on! In this scene we finally meet our villain and things are about to unravel fast for Zee, her friends, and all the people of Knobb’s Ferry. If a reader continued to page 70 they would encounter one of the most essential themes of the story: how there is a difference between wanting something and needing it at all costs. Principal Scratch has the unique ability to understand people’s innate desires and manifest them, which of course, goes very badly for everyone involved. It is the moment at which Scratch starts to churn greed through the town, infecting all who encounter him, including Zee and Elijah’s family. Truth be told if Zee thought she was having a bad time before the assembly and the introduction of Principal Scratch she has no idea what kind of horrors await her in the woods.