"The Truth of it All"

Gwen Florio grew up in a farmhouse filled with books and a ban on television. After studying English at the University of Delaware, she began a thirty-plus year 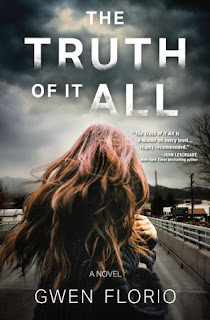 career in journalism that has taken her around the country and to more than a dozen countries, including several conflict zones.

Her first novel in the Lola Wick mystery series, Montana won the Pinckley Prize for Crime Fiction and the High Plains Book Award, and was a finalist for the Shamus Award, an International Thriller Award and a Silver Falchion Award. She has since released four other books in the Lola Wick series.

Recent novels include the standalone Silent Hearts, and Best Laid Plans, the first installment of a new mystery series.

Florio applied the Page 69 Test to her new novel, The Truth of It All, and reported the following:

At first glance, I wasn't sure whether Page 69 would work. Then I read it again, and had a complete "aha" moment.

The Page 69 Test is a surprisingly effective window into the issues explored in The Truth of It All. That particular page takes place in the mind of my protagonist, public defender Julia Geary, who finds herself defending a high school student accused of sexually assaulting a classmate – who steadfastly refuses to talk with police or prosecutors about what happened.

And why hadn’t Ana … contacted police herself? [Julia] already knew the answer to that one: Most girls didn’t, knowing that unless they’d been injured unto the point of death, somehow the blame would come back on them. Unless Ana was that one case in thousands of false accusations. Julia banished the thought as quickly as it crossed her mind. Despite Herculean training efforts aimed at law enforcement, too often a sneaking sort of suspicion against the girl still permeated such cases. If the police thought Ana’s case was worth kicking up to the prosecutor’s office, there was probably a there there.

In many ways, this is the fulcrum upon which the entire book pivots: Who is believed, and why? Who’s a credible victim, especially in sexual assault cases where the two knew one another? Does the all-too-standard defense (skewered brilliantly in the movie Promising Young Woman) that the assailant doesn’t deserve to have his promising future ruined hold sway when – as in this case – the victim is white and middle-class and the accused a brown-skinned refugee?

It also hints at the legal issues involved: From a prosecutor’s viewpoint, what cases are worth pursuing, given the (un)likelihood of a guilty plea or conviction? Or, for my young public defender, when is it best to advise a client to go along with a plea agreement? Given that nearly every client insists upon his or her innocence, what’s the tipping point that convinces a defense attorney of that?

Not to go all Kenny Rogers (except I’m going to, anyway), you’ve got to know when to hold ‘em, know when to fold ‘em, etc. Will Julia Geary walk away, or even run, from this case, as she so longs to do?

My Book, The Movie: The Truth of it All.