Nicola Harrison is the author of two historical fiction novels, Montauk and The Show Girl. 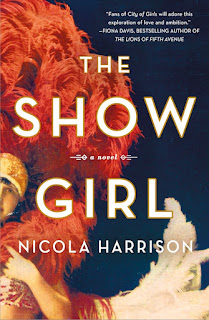 Born and raised in England, she moved with her family to Southern California when she was 14. She is a graduate of UCLA and received her MFA from Stony Brook.

Prior to writing novels she worked as a fashion journalist in New York City and now lives in Manhattan Beach, California with her husband, two sons and a high-maintenance chihuahua named Lola.

Harrison applied the Page 69 Test to The Show Girl and reported the following:

What a fun experiment! I opened my book to page 69 and found that this page does indeed capture the essence of what The Show Girl is all about.

My protagonist Olive Shine has been absolutely determined to make it onto the Broadway stage as one of the infamous and revered Ziegfeld Follies and she’d done everything she can to improve those chances, including allowing herself to be seduced by an older man she meets one night in Hollywood who spikes her drink, claims to be a studio executive and promises to put in a good word for her with Mr. Ziegfeld. Although in those early pages we cringe as Olive makes questionable, naive choices, by page 69 she’s attempted to put the past behind her and is beginning to enjoy success as an up-and-coming Ziegfeld girl. On this page, however, after seeing her perform, her mother has taken her father’s side and is adamant that she must give up performing if she’s to continue to live under their roof.

“I’m sorry Olive but I have to agree with your father on this,” she said, her face cold. She’d made up her mind on this one.

“Why? You were the one who encouraged me when I was younger, all those singing lessons you took me to.”

“We wanted you to have a hobby. Something you could talk about at social engagements. We never imagined you’d do this with it.” She sighed, exasperated with me. “Don’t you think I’ve looked at my life before and thought, What the heck happened? Don’t you think I might’ve had days where I would have liked to run off with the circus instead of making dinner each night, making sure you kids are clean and fed and have shoes that fit? Making sure your father’s beer is cold for when he gets home from work? Life isn’t always one big party. Life comes with responsibilities, Olive, whether you want them or not.”

So much of this book deals with female ambition and drive, and how for many women our lives depend on it – we simply cannot thrive without pursuing our creative interests – in Olive’s case it’s singing, in my case it’s writing. When we are able to delve into, and find success in those things that we love, we feel alive. In the 1920’s women had earned the right to vote and many women, specifically those known as flappers, were fiercely defending their freedom to live their lives, dress, dance and speak out the way they wanted to. But despite the changing times, there was still a huge part of society who looked down upon that desire. Sacrifices had to be made. Some women, like Olive, were forced to choose their freedom over their disapproving family. Later in the novel Olive will debate these very words from her mother in order to find her way forward and determine what success really means to her.