"Time Travel for Love and Profit"

Sarah Lariviere grew up in Champaign, Illinois, graduated with a degree in theater from Oberlin College and has a master’s degree in social work from Hunter College 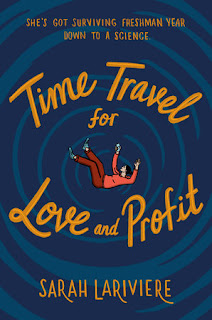 in New York City, where she specialized in casework with children and families.

She applied the Page 69 Test to her young adult novel, Time Travel for Love and Profit, and reported the following:

The nurse's office was silent. The nurse was shorter than me and had one of those faces that looked like she was both highly suspicious of and totally uninterested in me at the same time. She had me lie down on an examination table, where I instantly fell asleep on a rock-hard pillow that was smaller than my head.

I slept for a long time and dreamt my fingertips caught fire from touching a star. Or was I the star? I didn't know, but it felt too vivid for me. When I opened my eyes, I was staring at a rectangular ceiling light that was blinking and buzzing like it was being electrocuted. I said, "Excuse me, do you have any spare pairs of pants?"

"No," said the nurse, suspiciously yet disinterestedly. "Feeling better, then, are we?" When she cleared me to go to lunch, I put on my backpack and reluctantly left the quiet room.

I'd only been going to introduce myself to those girls. Why would that make me sick? Was it truly that difficult for me to act normal? My footsteps echoed through the empty hallway as I walked past the sad green lockers to the cafeteria.

As soon as I stepped over the threshold, I got hit with the smell of a hundred thousand years of lukewarm meat. At a table near the door, Coco leaned over to Lara and said, in a voice that wasn't trying not to be heard, "Look. It's Psycho Socks."

I think that this excerpt represents the essence of Time Travel for Love and Profit well. It shows the intensity of heroine Nephele's social anxiety, and hints at the science-fiction nature of her struggle when she describes her vivid dream that she touched--or was--a star. It also demonstrates the wry sense of humor Nephele uses to cope with her existential conundrum. She's a math genius who has developed a time travel app so she can go back in time and try to be cool, thus avoiding the loss of the best friend who ghosted her, freshman year. Unfortunately, the app is glitching, and Nephele is stuck in a time loop. As the years pass, Nephele stares down a future that looks more and more lonely--a fate that she's terrified is inevitable.

Page 69 is early in Nephele's journey. As she stumbles through her time loop, and her life feels more and more preposterous, like an epic tragi-comedy, new characters spark her imagination, revive her aching heart, and unknowingly, help her understand a fundamental flaw in her time travel experiment. Nephele continues to use humor to cope with her isolation, but between her new friends, the beautiful and strange boy who likes her exactly the way she is, and a growing appreciation for the mystery of time, her perspective shifts, and she falls into a love story that she couldn't have discovered any other way.