Melissa Scholes Young is the author of the novels The Hive and Flood, and editor of Grace in Darkness and Furious Gravity, two anthologies of new writing by D.C. women 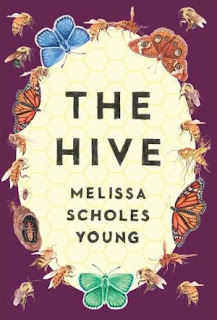 writers. She is a contributing editor at Fiction Writers Review, and her work has appeared in the Atlantic, Washington Post, Poets & Writers, Ploughshares, Literary Hub and elsewhere. She has been the recipient of the Bread Loaf Bakeless Camargo Foundation Residency Fellowship and the Center for Mark Twain Studies’ Quarry Farm Fellowship. Born and raised in Hannibal, Missouri, she is currently an associate professor in Literature at American University.

Scholes Young applied the Page 69 Test to The Hive and reported the following:

We’re at the Fehler family’s annual cookout on page 69 and browsers opening The Hive here will see why it’s a ripe read for our politically divided time. On this page, the employees of Fehler Family Exterminating and their families have gathered for a fish fry and Robbie Fehler, the patriarch of the family and owner of the struggling company they are celebrating, is supposed to be blessing the food. His talk turns political instead.

“We have a chance to make this country ours again and to make it great again just like Reagan said. They haven’t taken it all away yet, but they will.” Maggie moved closer to Robbie. She reached out her hand to his elbow, but it was too late.

“Now, I’m not saying if you vote for Obama, you’re fired.” Jenn burst out laughing but quickly realized it wasn’t a joke. Travis shuffled rocks at his feet. Jules stood square, facing her dad with her hands on her hips. Grace shot her a warning look.

“I’m saying you should educate yourself on the issues and think about who cares about what we care about—family, business, hard work, survival, and protecting those you love. Most of those folks out in Washington hate Middle America and us working-class folks.” Maggie cracked open a can of beer and shoved it at Robbie, who took it gratefully and downed half of it. Grace passed out empty plates and gestured toward the food. Hawks circled above them. Jenn swatted a mosquito on Travis’s bare back.

Robbie looked flustered that he was losing their attention. He wasn’t done, but Grace knew he wanted the last word. Maggie stepped in and raised her iced tea. “Thanks again for sharing your afternoon with us. We’re grateful you’re a part of the Fehler family. Now, let’s eat!” Robbie’s mouth hung open like one of the fish they were about to eat.

The page 69 test drops us into a scene of Midwestern fear and growing resentment leading up to Obama’s election and the foundation of blame that contributes to the radicalism resulting in the 2016 results. The Hive is set during the recession and this page is a glimpse into the family’s dynamics. Robbie’s oldest daughter, Maggie, dreams of running the family business one day but her father can’t imagine a woman being capable. His wife, Grace, seeks a peace that won’t hold. She’s ready to turn their employees down the dirt road to their exit so she can return to her true calling as a doomsday prepper. She’s building a bunker for the apocalypse on their camp property and cares little for Robbie’s politics and less for anything that takes her from her mission. The Hive is a story of sisters, secrets, and survival, and page 69 reveals many of them without spoilers for the rest of the story.