"We Have Always Been Here"

Lena Nguyen is a writer of speculative fiction and fantasy. She was raised in Phoenix, Arizona and has studied writing all over the world---including at Stanford, 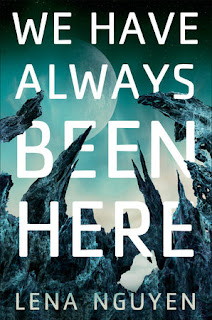 Brown, Harvard, and UCLA. She holds an M.F.A. in fiction from Cornell University, where she also taught as a lecturer of English, leading classes on creative writing, composition, comparative literature, and cultural studies.

Nguyen's career has been dedicated to writing. Along with lecturing and teaching, she has worked as a researcher of science fiction; a literary novel judge; a creative consultant; a copy editor; a developmental editor; a game developer and writer; and an assistant editor of the literary publication EPOCH. Her science fiction has won several awards.

She applied the Page 69 Test to her new science fiction thriller, We Have Always Been Here, and reported the following:

Page 69 of We Have Always Been Here is told, I think uniquely, exclusively in transcript or play script format; the in-book explanation for this is that the entire chapter is a transcription of what's happening in a piece of footage recovered from an exploration robot, who recorded the trials and tribulations of its owners, a pair of miners stranded on an alien planet. It reads like this:

Taban: You hear that sound, HARE? The sound of Daley wheezing away?

Taban: That's the sound of a lifetime of spongeburgers and milkshake cubes.

HARE (processors whirring): These are the things that nourish USER Daley?

Taban: What are hippies?

The page continues with the two miners bantering back and forth, with the exploration robot (the HARE) recording their conversation; however, subtext begins to show tension forming between the miners, and it seems that playful ribbing and jeering could threaten to turn into an all-out argument at any moment, veering back into terseness as soon as the conversation turns to more serious matters. Because the two only have each other, as well as the giant, naive, spider-like mechanical HARE, this ramps up the suspense: the two humans simply cannot afford to quarrel with each other, but, like skaters on thin ice, you watch them slide towards the forming cracks, anyway.

I don't believe that this page is a very good showcase for the novel at large. There are three timelines in We Have Always Been Here, the first following the protagonist, Dr. Grace Park, as her ship heads to a foreign planet and her patients and crewmates begin to experience identical nightmares and delusions. The second follows Park's past on a post-apocalyptic Earth, and sheds valuable light on why she is the person she is today (and why this is key in helping her solve the mystery of what's going on aboard her ship). The third timeline follows this pair of seemingly-unrelated miners, Daley and Taban, and the transcripts of their exploits (recovered from their HARE). The transcripts don't give a solid explanation of where these last characters are, who they are, when their events took place, or what's happened to them in Park's present day--at least not until much later in the book. Thus, Page 69 only gives a small sliver of the larger story: while it does a good job of showcasing Taban and Daley's perilous situation and the mounting tension between them, curious readers would have no idea that the book is actually more about Park and what's going on with her patients in the main timeline (and the androids that she's befriended, in the same way that the miners slowly befriend their HARE in this one).

Still, it does some of the work. We Have Always Been Here is about isolation; it's about our relationships with artificial intelligence and robots that we both create and can become fond of; it's about exploring unknown spaces with people the characters aren't sure they can fully trust. You get a tiny hint of that from this scene, though it attempts to be more light-hearted than the awful stuff happening elsewhere in the same continuum. Maybe an inquisitive reader who found this page would be compelled to read more, if only to find out what happens to Daley, Taban, and the erstwhile robot HARE!