Matthew FitzSimmons is the author of the bestselling Gibson Vaughn series, which includes The Short Drop and Poisonfeather. Born in Illinois and raised in London, England, 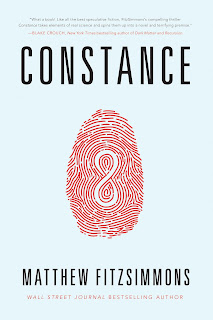 he now lives in Washington, DC, where he taught English literature and theater at a private high school for over a decade.

FitzSimmons applied the Page 69 Test to his new novel, Constance, and reported the following:

Con’s mind was reeling, and Kala’s outburst had forced her back down the porch stairs. It took her out of the shadows, and the sunshine lit up her face. Kala stared at her, mouth hanging open.

“What’s wrong with you?” Kala asked, all the fire gone from her voice.

Con didn’t know where to begin.

“Then what…?” She trailed off, staring hard at Con’s bare left arm. Self-consciously, Con tried to cover it with her other arm as if she’d been caught in the nude. In a way, she’d never been more naked in her life. Kala glanced up at her face, then back to the missing tattoos.

“Are you a dupe?” It was Kala’s turn to take a step back, her hand reaching blindly for the door.

Dupe was far from the cruelest slang for clones, but it still landed hard. Especially from a friend.

This was a fascinating if not entirely comfortable experiment. As an author, I like to imagine that any page in any of my books could stand on its own and hopefully cause the reader to go back and start from the beginning. That’s surely not the case, and rereading page 69 reminded me of an interview with Mick Jagger who said he hated to hear a Rolling Stones song on the radio, because he could hear all the mistakes but couldn’t fix any of them. I feel his pain in that regard.

That said, I like what page 69 says about Constance. This scene is Con’s first encounter with someone who knew her from before. All prejudice is a betrayal of the human contract, but when that prejudice comes from someone you know and consider a friend, the betrayal is all the more traumatic. Kala’s repulsion is Con’s wake-up call to what her new reality as a clone has in store for her.

When I was worldbuilding, I thought long and hard about the social repercussions of new technologies. In 1978, when Louise Joy Brown gave birth to the first baby conceived using invitro fertilization, someone, who probably thought they were being terribly clever, dubbed it a “test-tube baby.” Such a nasty, petty way to describe a child. The procedure was also opposed by organizations such as the Catholic Church and by Jerry Falwell, the leader of the “Moral Majority.” Today there are millions of children who were conceived via IVF, but it took years for that stigma to fade away.

It seemed self-evident that the introduction of human cloning would provoke profound reactions across the political and ethical spectrum. I liked this scene between Kala and Con because it portrays that reaction in personal terms, and the book is, at its heart, character driven.