Kira Jane Buxton's writing has appeared in The New York Times, NewYorker.com, McSweeney’s, The Rumpus, Huffington Post, and more. Her 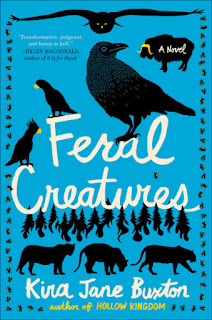 debut novel Hollow Kingdom was an Indie Next pick, a finalist for the Thurber Prize for American Humor, the Audie Awards, and the Washington State Book Awards, and was named a best book of 2019 by Good Housekeeping, NPR, and Book Riot. She calls the tropical utopia of Seattle home and spends her time with three cats, a dog, two crows, a charm of hummingbirds, five Steller's jays, two dark-eyed juncos, two squirrels, and a husband.

Buxton applied the Page 69 Test to her new novel, Feral Creatures, and reported the following:

On page 69 of Feral Creatures, our crowtagonist, S.T. is chronicling his flights to the Nightmute library in Alaska. A flightless crow, he must travel on the back of his bald eagle ally, Migisi. The purpose of these trips is to find reading material to educate and buoy the spirits of his charge, Dee. Dee is the last child on earth and S.T. the crow vows to do everything corvidly possible to keep her alive.

I’d say the Page 69 Test works very well for Feral Creatures. It certainly showcases the waggish, witty banter of S.T., our intrepid and loquacious crow. It details where the book begins as S.T. is describing his flight over the Alaskan tundra. It chronicles the specific fauna and flora S.T. spots below him (“We soared over the fiery crimson takeover of dwarf birch, over moose (Meese? Moosees? Dammit, from here on let’s just call them gangly Canadian coatracks) and lemmings and black spruces"), which is certainly indicative of a novel that extols the virtues of nature. It hints at the dilapidation and ruin of buildings in this post-apocalyptic tale and the emptiness of a world without humans who succumbed to a mysterious virus. It even hints at climate change, which continues to be a threat through the pages of Feral Creatures despite the absence of the human race (“even through the worsening storms that plagued us, whose waves pounded us like the fists of impatient gods”). S.T.’s dedication to Dee and commitment to her education is evident across the page as well as being the very impetus for these flights to the Nightmute library. At the end of page 69, S.T. admits to working hard to evolve his own reading ability for Dee’s education as well as confessing to falling in love with poetry. Very specifically, he professes his love for the verses of Emily Dickinson and page 69 ends with a Dickinson poem that S.T. completely misinterprets to be about the apocalypse and how handsome crows are!

My Book, The Movie: Hollow Kingdom.

My Book, The Movie: Feral Creatures.