Death in Castle Dark is Veronica Bond's first mystery in the Murder and a Mystery series; as Julia Buckley she writes several series for Berkley Prime Crime, 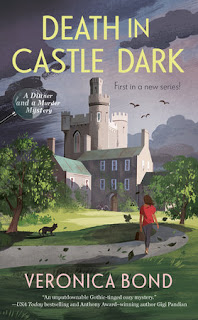 including the best-selling Writer's Apprentice Series.

Bond applied the Page 69 Test to Death in Castle Dark and reported the following:

Death in Castle Dark is the first in a new mystery series which pays homage to its Gothic forebears, starting with the setting of a giant castle. The building is utterly ridiculous in that it is merely a copy of a historic European castle, and it appears in the unlikely location of a rural Illinois town. The novel revolves around Nora Blake, an actor who has just lost a coveted part at a Chicago theater and is talked into auditioning for a mystery theater troupe which works out of Castle Dark. Once Nora arrives at this strange place, she finds that it is both beautiful and frightening, comforting and terrifying. When a murder happens within its walls, she begins to fear she has made a mistake.

Readers of page 69 of my Gothic-inspired novel would certainly get a sense of the tone which I have dubbed cozy-gothic. The first evidence I would offer is that the page is full of the vocabulary associated with the Gothic tradition, including surreptitious, crept, stone, marble, castle, shadowy, edifice, gray, lock, hallway, and gallery. This diction serves to emphasize either some aspect of architecture or the suspense that drives the narrative, and many of the words have an antiquated feel.

In addition to the tone, one might also get a good sense of character. Without giving spoilers, when the page begins, Nora Blake, a very new occupant of Castle Dark, has done something very impulsive that she now feels compelled to keep secret. She is assessing her chances of maintaining this secrecy by studying the castle and its various entrances, wondering how she can best be an invisible presence in the dark halls. While the overall premise is lighthearted, the page will reveal the Gothic undertone.