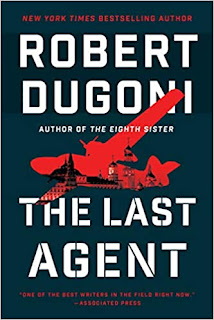 in Seattle, which has sold more than 6 million books worldwide. He is also the author of The Charles Jenkins espionage series, and the David Sloane legal thriller series. He is also the author of several stand-alone novels including The 7th Canon, Damage Control, and the literary novel, The Extraordinary Life of Sam Hell; as well as the nonfiction exposé The Cyanide Canary, a Washington Post Best Book of the Year. Several of his novels have been optioned for movies and television series.

Dugoni applied the Page 69 Test to his new novel, The Last Agent, and reported the following:

On page 69, Charles Jenkins enters a Swiss Bank in Moscow. His mission is to make a deposit into an account in order to obtain his signature card. He needs the signature card to determine the name of the teller who opened his account and likely opened the account of Victor Federov (using an alias). Without Federov, Jenkins cannot move forward. The quest would fail. So page 69 is much like the rest of the novel in that every step Jenkins takes is dependent on him succeeding in the prior step. If he fails at the bank, the story ends.