L.C. Shaw is the pen name of internationally bestselling author Lynne Constantine who also writes psychological thrillers with her sister as Liv Constantine. Her family 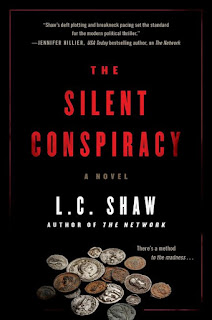 wonder if she is actually a spy, and never knows what to call her. She has explored coral reefs all over the world, sunken wrecks in the South Pacific, and fallen in love with angelfish in the Caribbean. Constantine is a former marketing executive and has a Master’s in Business from Johns Hopkins University. Her work has been translated into 27 languages and is available in over 31 countries.

Shaw applied the Page 69 Test to her new novel, The Silent Conspiracy, and reported the following:

Page 69 introduces the reader to Leonard Reed, one of the most contemptible characters in The Silent Conspiracy. Leonard is the CEO of Jefferson Health Care, the company being sued in a class action suit that has reached the Supreme Court. While his chapters are more sparse than others, his role is a pivotal one in the book. His behind-the-scenes maneuvers directly correspond to the story that one of the main characters, Taylor Parks, is covering and he is integral to the major plot points of the book. Leonard’s actions have repercussions throughout the book and highlight one of the book’s major themes—the changing role of health care in this country and how it’s controlled more by businesses than doctors. Page 69 opens a new chapter where Leonard is at a board meeting discussing the implications of a new health insurance policy that will make the company a lot of money but has stringent exclusions that have resulted in bad publicity and a lawsuit. Leonard is power hungry, arrogant, and morally bankrupt. Here is a snippet from that page to give you a sense of his character:

Approving nods bobbed around the table. Leonard Reed, CEO of Jefferson Health Care, leaned back into the supple leather chair and rested his head. He studied the faces of his board while gnawing at a hangnail on his pinkie. He dislodged it and spit it on the table. Leonard’s lips parted in a smirk at the woman next to him; she had averted her eyes and was staring at the table where he’d spit his nail She didn’t dare allow her revulsion to show. He was amused by her lame attempt at nonchalance and moved so his thigh was touching hers under the table. She didn’t react. He wondered how long it would take before she had the nerve to move her chair farther from his, only half listening as Marvin, his newest hire, droned on.

The Page 69 Test: The Network.

My Book, The Movie: The Network.