Charlie Lovett is an award-winning playwright and author of the New York Times bestseller The Bookman’s Tale and other novels. His plays for children have been 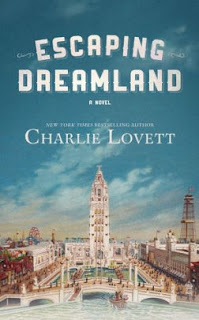 seen in over five thousand productions worldwide. A former antiquarian bookseller, he collects books and memorabilia related to Lewis Carroll and Alice in Wonderland and has written extensively on Carroll. He hosts the literary podcast Inside the Writer’s Studio. Lovett and his wife, Janice, live in Winston-Salem, North Carolina, and in Kingham, Oxfordshire.

He applied the Page 69 Test to his new novel, Escaping Dreamland, and reported the following:

Page 69 finds one of our three historical heroes, Thomas De Peyster working as a reporter in San Francisco in 1906. He has defended, in print, a group of stage hands who had been disparaged by the great tenor Enrico Caruso and, as a way of saying thank you, the men give Tom a night with a high class prostitute. The bottom of the page shifts to the next morning when Tom is about to take a picture of this mysterious woman. Just as he is about to press the shutter, the floor “falls out from beneath him.”

Most of Escaping Dreamland is set in New York City, so this scene in San Francisco is atypical. In it we meet only one of the book’s four heroes. However, this is a critical page for Tom—much of the baggage he carries for the rest of the book is found right here. Romantically naïve, Tom has convinced himself that he has fallen in love with Isabella the prostitute and when she dies suddenly on the next page, it haunts him for the rest of his life. Her death is just the first of many he sees that day, for the sudden shift in the floor that Tom feels on the bottom of page 69 is the great San Francisco Earthquake of 1906. In this sense, the page 69 test works. Consider that each of the four heroes has a tragic event in their past that leaves deep scars. The earthquake is Tom’s. Real historical events are used throughout the book and are made personal for our characters. The death of the prostitute Isabella makes the earthquake a personal tragedy for Tom. The earthquake is probably the best known historical event in the book for modern readers but there will be many others. In the pages leading up to page 69 Enrico Caruso appears—one of many “celebrity” cameos throughout the novel. The combination of a tragic event, a personal story, and true history that readers find on page 69 is a fair representation of what will be found throughout the book. What’s missing is the personal relationships that develop among the characters. For Tom, what happens on page 69 will color those relationships significantly.

Learn more about the book and author at Charlie Lovett's website.