Bernard Schaffer is an author, full-time police detective, and father of two. As a twenty-year veteran police officer, he’s a court recognized narcotics expert, a 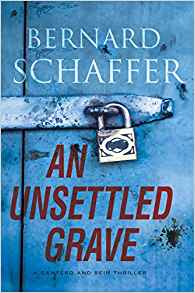 graduate of the prestigious Top Gun Undercover Law Enforcement Training Program, child forensic interviewer, and possesses a Class A certification in the use of wiretaps. A child actor, Schaffer appeared in multiple television commercials, performances at the Walnut Street Theater (where his picture still hangs in one of the upper, darker corners), Saturday Night Live, and the Nickelodeon series Don’t Just Sit There. Schaffer is the author of multiple independently-published books and series, including Superbia, Grendel Unit, Guns of Seneca 6, and more. A die-hard supporter of the Philadelphia Union, he is proud to say that he’s never been ejected from a game. Yet.

Schaffer applied the Page 69 Test to his new novel, An Unsettled Grave, and reported the following:

Hell no page 69 is not representative of the entire book. I hate that stupid test. I don't even like writing synopses or product descriptions of books.

My work in the Santero and Rein Thriller Series examines what happens to good people who willingly thrust themselves into the abyss. They absorb interactions with true evil. Child molesters. Serial killers. Predators. The toll it takes on them, psychologically, is something I've seen and felt firsthand. It changes you. Some of us get consumed by it, some of us find a way to carry on.

My Book, The Movie: An Unsettled Grave.