David Wellington, aka D. Nolan Clark, aka David Chandler is the author of over twenty novels of action, suspense, and drama. 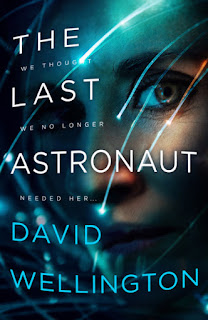 He applied the Page 69 Test to his new novel, The Last Astronaut, and reported the following:

Page 69 of The Last Astronaut is the exact moment the story kicks into high gear. Up until this point we’ve only been exposed to a cosmic mystery. A giant, alien rock is hurtling toward Earth. It hasn’t responded to any signals, and we can’t even tell if it’s being guided by an intelligent hand.

NASA sends up a spacecraft to meet the thing. So does a commercial spaceflight company, called KSpace. KSpace got there first, embarrassing NASA and maybe compromising the entire mission. Commander Sally Jansen, of the NASA ship, tries to contact the KSpace ship, to suggest they work together to plumb the alien ship’s secrets and mysteries.

Except now the KSpace ship isn’t responding to signals, either. It’s been hanging motionless near the alien ship for nearly a day, and there’s been no word that whole time.

Did something happen to the KSpace crew? Did they encounter the aliens? Are they still alive? Jansen has orders not to intervene or investigate. She’s got her own mission to carry out, and the fate of the KSpace astronauts is none of her business. It could even get NASA in legal trouble if she goes over there. There’s just one problem.

Twenty years ago, Sally Jansen was supposed to go to Mars. Her ship had to turn back after an accident left one of her crew dead. She has blamed herself, ever since, for what happened. She can’t live with more lives lost on her watch.

So on an EVA outside her own spaceship, she unhooks her safety line and starts flying over to the KSpace ship. She figures she’ll just look in the windows. Knock on the hatch, make sure they’re okay over there.

That’s what happens on page 69.

What she finds leads to a saga of fear and wonder. A story that’s equal parts science fiction and blood-curdling horror. It will take her and her own crew inside the alien spacecraft—a place beyond any human experience, a place no human being could comprehend. It’s a trip not everybody will return from, and one that will make Sally Jansen confront her darkest self—and how much of her humanity she’s willing to sacrifice, to find redemption.

Learn more about the book and author at David Wellington's website.