Jess Redman has wanted to be an author since age six, when her poem “I Read and Read and Read All Day” appeared in a local anthology. It took a little while though. 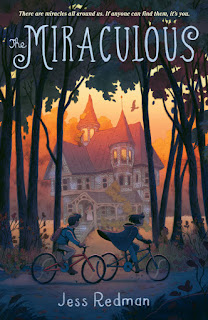 First, she did things like survive middle school, travel around the world, become a therapist, and have two kids.

But then finally, her childhood dream came true! Her middle-grade debut, The Miraculous, was released last month. Her second middle-grade novel, Quintessence, will be out on July 28, 2020.

Redman applied the Page 69 Test to The Miraculous and reported the following:

In this part of the story, Wunder is going to return to the cemetery for the third day in a row. On the first day, he was there for the funeral of his baby sister who passes away after just eight days of life. At the cemetery, he met Faye, a cape-wearing fan of the paranormal who recently lost her grandfather.

The next day, Wunder returned to the cemetery, which he calls “the most unmiraculous place of all.” You see, Wunder was a miracologist. He collected stories of inexplicable and magical events in a journal that he called The Miraculous. He was sure that his sister would be another of those miracles. But she wasn’t. And so Wunder went to the cemetery and left The Miraculous there.

And now, on page 69, Wunder wants to return to the cemetery. He left The Miraculous, but there are other things happening in the woods and in the graveyard—possibly magical things that he wants to know more about. And Faye, who is always up for a cemetery visit, wants to join him.

That’s what the story is about. It’s about finding the light. It’s about journeying alongside one another through sadness. It’s about how in this world of dark and bright, of grief and miracles, we are healed by connection.