Michael Blumlein is the author of several novels and story collections, including the award-winning The Brains of Rats. He has twice been a finalist for the World Fantasy Award and twice for the Bram Stoker. His story 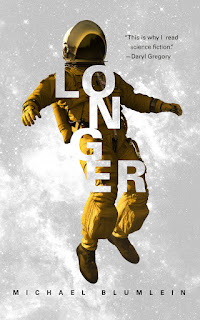 "Fidelity: A Primer" was short-listed for the Tiptree. He has written for both stage and film, including the award-winning independent film Decodings (included in the Biennial Exhibition of the Whitney Museum of American Art, and winner of the Special Jury Award of the SF International Film Festival). His novel X,Y was made into a feature-length movie. Until his recent retirement Dr. Blumlein taught and practiced medicine at the University of California in San Francisco.

Blumlein applied the Page 69 Test to his new novella, Longer, and reported the following:

On page 69 my two main characters, Cav and Gunjita, husband and wife, are having a conversation. Both are scientists, and they're trying to understand a scientific riddle that's unexpectedly presented itself. They're having a difference of opinion. Cav is fairly certain the answer lies in one direction; Gunjita is equally certain it lies in the opposite direction.

This difference reflects their different personalities. Cav is a dreamer and a wool-gatherer by nature, qualities that Gunjita admires and respects. Gunjita is pragmatic and thoughtful in ways that Cav both admires and lacks.

They met in their twenties. For Cav it was love at first sight. Nearly sixty years have passed since then. They've spent a lifetime together, a long and loving one.

Gunjita has just taken a treatment making her young again. Cav, at eighty, is dragging his feet.

Gunjita is growing impatient with him. She doesn't understand what's holding him up. Cav doesn't quite understand either. He loves her dearly, and he loves life. But he's already lived a long and deeply fulfilling one. What more can he expect? Is there such a thing as enough?

Longer is about many things – aging, mortality, scientific achievement, the very nature of life – but the persistence and changeability of love and togetherness lie at its heart.