"A Matter of Will"

Adam Mitzner is currently the head of the litigation department of Pavia & Harcourt LLP in midtown Manhattan and the author of several acclaimed novels, 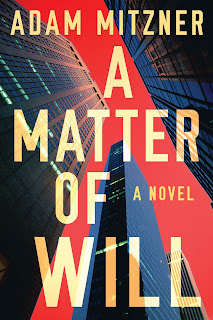 including Dead Certain, A Conflict of Interest, A Case of Redemption, Losing Faith, The Girl from Home, Dead Certain and Never Goodbye.

Mitzner applied the Page 69 Test to his new novel, A Matter of Will, and reported the following:

Page 69 of A Matter of Will begins the 12th chapter and describes Will Matthews’ current living arrangement – a three-bedroom walkup in the Murray Hill section of Manhattan, which he shares with three other guys.

By this point in the book, Will has already met Sam Abaddon, the uber-wealthy investor who appears to be the answer to Will’s prayers. Prior to meeting Sam, Will was on the verge of being fired from his job as a stock broker, and sent packing back to his Midwest hometown with his tail between his legs. But now Will is on the cusp of snagging Sam’s business, which means that he won’t be living with his current roommates for too much longer.

This passage is representative of how life starts for a lot of would-be Masters of the Universe. They come to New York City with visions of living in penthouse apartments with commanding views of the city, and they end up sharing a bedroom in a setting that more resembles their college experience than Wall Street success.

At the same time, the reader knows that Will is within striking distance of that fancy penthouse he has always dreamed about. The question by page 69 of the novel is: What strings are attached to Will getting it?

Learn more about the book and author at Adam Mitzner's website.