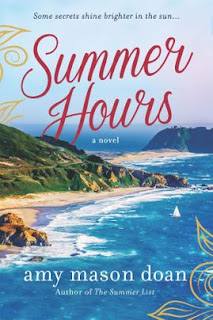 She’s written for The Oregonian, San Francisco Chronicle, Wired, Forbes, The Orange County Register and other publications. Doan has an M.A. in Journalism from Stanford University and a B.A. in English from U.C. Berkeley.

Doan is the author of The Summer List and the newly released Summer Hours.

She applied the Page 69 Test to Summer Hours and reported the following:


I wandered rooms like a nosy houseguest, finger-combing the fringe on the fuzzy red sofa afghan, turning knobs on our decades-old intercom panel. Serra and Eric and I used to play that we were DJs on it.

The books on my bedroom shelf and the clothes in my closet seemed like someone else’s, like riches, and I couldn’t remember why they hadn’t made the cut when I’d packed for Berkeley last summer.

I picked up the framed picture of Eric and Serra and me after the Senior Awards ceremony. We were grinning into the sun with our arms flung around each other, clutching our prizes—me the Haggermaker, Serra her Artists’ Network certificate, Eric the Rotary Club’s bright medal.

You must call each other all the time.

Eric and I hadn’t spoken once.

This is when 21-year-old Becc first comes home to her house in Southern California after leaving for college in Berkeley. We get a sense of Becc’s tight, lifelong friendship with Eric and Serra—their parents called them “The Three Mouseketeers” when they were younger—and how wounded Becc is by Eric drifting from her life. (Early in the book, Eric awkwardly reaches for more than friendship with her but she’s not ready.)

We also see that Becc was a high achiever when she was younger. But she’s examining the photo as if that good girl standing in the sun is now a stranger. Her desire to maintain a perfect image for her wealthy benefactor, Francine Haggermaker, is evident here, and foreshadows what’s to come. I had a lot of fun with the lies that Becc later writes in her letters to the older woman. Francine is a bit of a cipher until late in the book, but Becc is convinced that she will disapprove of her secret affair and increasing rebelliousness, rescind her scholarship, and make her life hell. Becc is like all of us in those not-quite-adult, not-quite-child years. She still has so much to learn.

Page 69 doesn’t hint at the other half of the book—adult Becc driving up the California coast with a mystery passenger to an old friend’s wedding, trying to make things right along the way.

But overall this captures the novel’s central conflict and my writing style perfectly, so I love it.