James Hankins writes thrillers, mysteries, and novels of suspense, including The Inside Dark, The Prettiest One, Shady Cross, Brothers and Bones, Drawn, 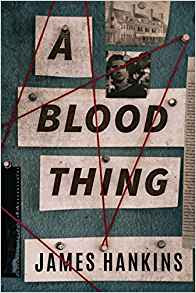 and Jack of Spades. He lives north of Boston with his wife and sons.

Hankins applied the Page 69 Test to A Blood Thing, his seventh novel, and reported the following:

My latest suspense novel, A Blood Thing, is many things—political thriller, police procedural, crime novel, and family drama to name a few—but what sets the story into motion is a complex plot hatched and executed by a twisted, cunning blackmailer who has spent more than a year planning his scheme. His target is a powerful Vermont family of siblings. First, we meet Andrew Kane, the youngest governor in the state’s history, who at the beginning of the novel is shaking hands with citizens after a ceremonial ribbon cutting when a man slips him a cellphone and, before slipping away into the crowd, mysteriously instructs Andrew to hold onto the phone because he will need it “after the arrest,” leaving Andrew to wonder “whose arrest?” We find out shortly thereafter, however, when Andrew’s youngest brother, Tyler—a sweet twenty-nine-year-old man with a limited intellectual caused by a tragic fall two decades earlier—is arrested for murder. There is also their brother, Henry Kane, an internal affairs detective with the state police who will informally work the case. And, finally, there is Molly Kane, a decorated military veteran and Tyler’s twin sister.

The overarching theme of A Blood Thing is family and the lengths to which we will go to protect the ones we love, but this is a crime novel, one based on a complicated scheme of extortion and revenge. In fact, the blackmailer’s plot is so complex that he has dedicated an entire wall in a basement room to a graphic representation of it. Page 69 of the book is where the first description of that wall appears:

He closed the thick binder, leaned back in his chair, and allowed his eyes to drift up to the wall above his desk. His canvas. His art. His masterpiece.

Photographs taped to the wall. And news stories. And copies of pages from his binder. And a detailed timeline spanning several sheets of paper taped end to end, events written on it in black pen, some that had already occurred, others planned but yet to take place. Thin yarn of various colors—a veritable rainbow—attached to thumbtacks, stretching from one item to the next ... from a photograph to an event on the timeline, from a news story to a sketch he had made. Dozens of threads, dozens of connections, forming a web across a mosaic that covered an entire wall, the visual representation of a plan he had crafted over the course of more than a year. A plan he had finally put into motion the other day. A plan that was going very well so far.

In fact, it was going perfectly.

It’s fitting for purposes of this exercise that the blackmailer’s wall, so central to his plan and to the story itself, appears on page 69. It’s so important to A Blood Thing, in fact, that the cover of the book—on which appear words on paper, and photographs, and yarn, all held in place by thumbtacks—was designed to mimic the wall.