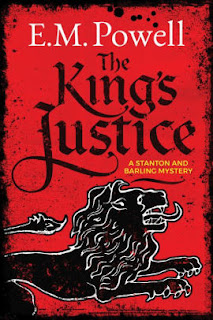 with The King's Justice. She is a contributing editor to International Thriller Writers The Big Thrill magazine, blogs for English Historical Fiction Authors and is the social media manager for the Historical Novel Society. Born and raised in the Republic of Ireland into the family of Michael Collins (the legendary revolutionary and founder of the Irish Free State), she now lives in northwest England with her husband, daughter and a Facebook-friendly dog.

Powell applied the Page 69 Test to The King's Justice and reported the following:

In my new medieval murder mystery, The King's Justice, Aelred Barling, esteemed clerk to the justices of King Henry II, is dispatched from the royal court with his young assistant, Hugo Stanton, to investigate the brutal murder of the local smith in a village outside York. A suspect is under lock and key in the prison, and the angry villagers are demanding swift justice. The case appears straightforward and Barling is certain that his investigation will be quickly concluded. But then young Stanton had to open his mouth and throw the whole thing into disarray. My Page 69 has the deeply irritated Barling revisiting what he knows of the crime so far and trying to figure out just what is going on. Problem is, Barling doesn’t yet know that this is the first murder of many—and things are about to get a whole lot worse…

No thanks to Stanton. ‘Sir Reginald, how tall was Geoffrey Smith?’ The messenger’s question asked not once but twice in the foul atmosphere of the forge.

Barling had wondered if his ears had deceived him as he’d stared at Stanton. His fingers tightened on his stylus in annoyance. He was in the middle – the middle – of examining the forge. That was the task in hand at that moment. To approach it with order. With method.

Murder took place in Smith’s own forge. No witnesses.

The examination of the forge. That should have been the one task at that moment, nothing else. But Stanton, taken hold of by a personal memory, had opened his mouth and immediately disrupted that order.

As so many others had done before. Barling had witnessed passions take over in matters of law on far too many occasions over many years, when facts and distance were needed. The law was based on consistent, sound judgement. That was how it worked. Emotion made for neither. And emotions indeed ran high here.

The emotions of Agnes Smith in particular. Not only had she suffered the grievous loss of her father, she had made the terrible discovery of his body. Her strident boldness was another matter, however. He had not encountered very many young women who would be happy to hang a man.

Body is buried in the churchyard – I have not viewed it.

In the confusion of the assembly outside the forge, he had wondered – feared, even – that Agnes would tear Lindley from Stanton’s grasp and do it there and then. It would not have been difficult. Stanton was not a natural guard. Barling shook his head.

Accused is Nicholas Lindley. An outlaw who had claimed to be a beggar.

Barling could also understand the villagers’ naked thirst for vengeance. Feelings always drove the ignorant and uneducated. They could not be expected to consider the proper administration of justice. It fell to Barling to make sure they did. A heavy burden, but one he was happy to shoulder for his King.

Lindley swears he is innocent.

Is this page representative of the rest of my novel? Well, it certainly is of Aelred Barling and his methodical approach to solving crime. Stanton’s scenes are a lot more action-packed. Together, they make quite a team!