Jeff Wheeler's best-known fiction includes the Legends of Muirwood & Covenant of Muirwood trilogies, The Whispers from Mirrowen trilogy, and a graphic novel, The Lost Abbey. 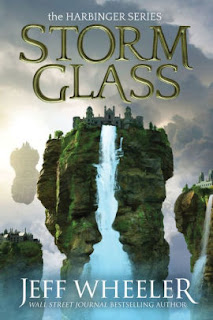 He applied the Page 69 Test to his new novel, Storm Glass, and reported the following:


I think I was lucky on this test, because Page 69 ended up being the start of a chapter! In Storm Glass, there are two main protagonists: Cettie who grew up in a terrible place called the Fells and Sera Fitzempress, a princess born to privilege. The book begins with Cettie’s point of view, but in the chapter before page 69, we meet Sera for the first time and get to know her spunk and mischievous nature. She’s very sassy to her governess. Because Sera lives in an estate that literally hovers over a huge city below, she likes to climb a certain tree in the garden to look over the wall and catch glimpses of the world far below. Nothing bad has ever happened before when she’s done this, so she thinks it’s perfectly safe. I know my own kids have done things like this before ending up getting stitches in the emergency room, or (more recently), getting a concussion playing inside an Amazon box! Right before this scene, the branch Sera is standing on abruptly breaks. What happens next? You’ll have to read…here on page 69:

Sera’s heart stopped as the branch gave way. She was falling, scraping down the length of the trunk, and if not for her father’s quick reflexes, she would have broken her bones. At least. He was near enough that he caught her, but the impact had knocked them down. Sera heard screaming, both from her mother and Hugilde. The impact had only taken her breath away ... and yet...

If falling from a tree felt like this, what would falling off one of the floating manors do to someone? There were stories that some of the wealthy, those who had lost everything, opted to jump rather than face their creditors.

Sera’s father sat up, and she hugged him, filled with gratitude and remorse. He held her back, whispering soothing words, his anger replaced—for the moment—by intense relief.

“I’m not hurt,” Sera said, squeezing him harder. “I’ve climbed that tree so many times. It’s never done that.”

“How many times must I tell you, Seraphin?” he said, pulling her face back and looking into her eyes worriedly. “Just because something doesn’t happen constantly doesn’t mean it won’t happen at all. Many of the consequences we face are delayed. This principle governs so much in this world.”

Yes, she had heard him preach this many times. A person can be dishonest once and get away with it. Twice even. Maybe a dozen times. But then the law finds out, and the punishment comes swift and fierce, paying in interest from the past. He had always taught her, from earliest childhood, that she could choose her actions, not the consequences of those actions.

My Book, The Movie: Storm Glass.