"Nights of the Red Moon"

Milton T. Burton is the author of Nights of the Red Moon and two previous crime novels. He has been variously a cattleman, a political consultant, and a college history teacher. Burton lives in Jacksonville, Texas. 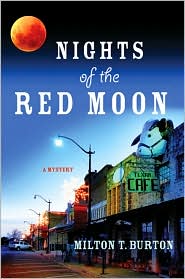 He applied the Page 69 Test to Nights of the Red Moon and reported the following:

Page 69 is all dialogue. This is representative:

Everybody called them Gog and Magog. Those weren't their real names, of course. Their birth certificates said Lon and Don Flanagan. The Flanagan boys were identical twins, now forty years old, six feet eight inches tall, and pushing three hundred pounds apiece, most of which was bone and gristle. They were pulpwood cutters, part of an extensive clan that had eked out a precarious existence for generations by feeding the paper mills of central East Texas.

Gog and Magog lived simple lives that consisted of work, hunting, sex with their rawboned wives, and what they called "frolic," by which they meant the periodic near-destruction of the Roundup Club, a large country & western dance hall that sat just past the city limit out on Route 9 South. These annual events constituted a sort of demented fall harvest festival for the pair, and usually began near the end of a week-long drinking binge. Or as Magog explained to me when I talked to him in the jail after the last such affair, "All we wanted to do was have a few more beers and listen to the music."

Nelda Parson's father was the one responsible for their unorthodox nicknames. One night a decade and a half earlier, he chanced to be driving past the Roundup just as that year's frolic burst out through the front doors and rolled onto the parking lot. Teeth, hair, and eyeballs were flying every which way, along with unlucky patrons and assorted lawmen, including a pair of rookie city cops who'd been foolish enough to answer the frantic call for assistance that had gone out over the police radio. Sweet and gentle man that he was, Reverend Parsons was so shocked by this unrestrained orgy of redneck violence that he later said that for a few horrifying moments he thought the Tribulation had come to town, and that Armageddon was at hand.

This statement got wide currency and inspired some other Bible scholar to reach far back into the maelstrom of Old Testament prophecy and extract from the Book of Ezekiel the names Gog and Magog, those two evil nations destined to plague the righteous in the earth's Latter Days. The twins were flattered and let it be known that they considered the nicknames the highest complements ever paid them.

Read chapter one of Nights of the Red Moon, and learn more about the novel at the publisher's website.

My Book, The Movie: Nights of the Red Moon.