Thelma Adams has been Us Weekly’s film critic since 2000, after six years reviewing at the New York Post. She has written for Marie Claire, the New York Times, Cosmopolitan and Self.

She applied the Page 69 Test to her new novel, Playdate, and reported the following: 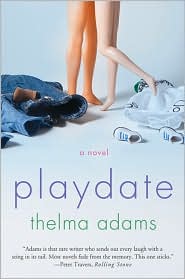 All the Zen euphoria Lance had felt with Wren had evaporated with the scent of the lavender candles. He stepped out of the shower, toweled off, shaved, and padded from the bathroom to the bedroom. Glancing around, Lance considered the Danish modern furniture as if entering a hotel room. It was nice enough, but he hadn’t chosen it. Darlene had. At that moment, he was entirely detached from it. He felt numb to his surroundings, as if he could exit naked and leave almost nothing of himself behind. He imagined exiting the front door into the glare off the white stucco, through the tended garden, past the birds-of-paradise and the ADP Security sign. He could stroll down the scrubbed sidewalk past new houses with Mediterranean Revival facades— and could keep walking, north or south, along the coast and start fresh. But he wondered if he…

This chapter originally began with a title, instead of Chapter 5. It was called “Free-Range Children,” (now the name of a blog by the wonderful journalist Lenore Skenazy). In it, stay-at-home-dad Lance and his yogi neighbor Wren have just had Tantric Sex in his bedroom, while his wife Darlene was at work and the kids at school.

The chapter that finds itself on Page 69 originally launched in a way that my editor, Katie Gilligan of Thomas Dunne Books/St. Martin’s, suggested I change. A number of chapters ended strongly, she observed respectfully, but began in a more matter-of-fact, movie script way. This one originally started “Meanwhile, back on Pacific Breeze, Lance had toweled off, shaved and padded into the bedroom.” Katie resisted those “meanwhile” openings. When I revised, the first paragraphs always became stronger, deeper, more arresting. I also changed “good feeling” to “euphoria,” such a better, more beautiful word.

In earlier drafts, the narrative had then shifted into a memory. Now, that memory is elsewhere and the chapter opening stays on point: Lance’s disconnect from his surroundings. That sense of dislocation leads to a theme of the book, and of my life. If you walk out of one gnarly situation to start anew, sooner or later you will find yourself tied in another knot. You have to do internal work first, and that can be the hardest to achieve.

I’ve always been curious about fathers who walked out of the front door to get a pack of cigarettes and never returned; I have the sneaking suspicion they recreate the same messes in the new lives they create. And then need another pack of cigarettes. In this book, Lance stays and actively revises his situation, while never perfecting it. Hmm. Like novel-writing, no?

Learn more about the book and author at Thelma Adams' website.