Steve Hockensmith is the New York Times best-selling author of Pride and Prejudice and Zombies: Dawn of the Dreadfuls. His “Holmes on the Range” historical mysteries have been nominated for the Edgar, Shamus, Anthony, Nero and Dilys awards. 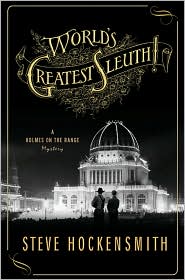 He applied the Page 69 Test to the latest entry in the series, World's Greatest Sleuth!, and reported the following:


1893. Chicago. The World’s Columbian Exposition. The most famous detectives in the world have gathered in the fabled “White City” for a sleuthing contest. Our humble heroes -- Sherlock Holmes-worshipping cowboy-turned-deducifier Gustav “Old Red” Amlingmeyer and his brother/biographer/Watson Otto -- are two of the contestants. The competition’s going badly...and nearly derails when one of the organizers is found smothered in the Mammoth Cheese from Canada.

Not a bad set-up, eh? The Devil in the White City with fewer bodies and a lot more laughs.

So does page 69 of World’s Greatest Sleuth! find our heroes battling a bad guy atop that towering new-fangled monstrosity “the Ferris Wheel”? It does not. Does it offer up a stunning twist involving Nikola Tesla, Frank Lloyd Wright, L. Frank Baum and Aunt Jemima (all of whom were at the Exposition)? Nope. Is it actually, you know, dramatic in any way whatsoever? Not really. It just shows a bunch of people sitting around gabbing at a dinner party.

But wait -- don’t reach for that red pen! It’s not time for an F yet! I didn’t say World’s Greatest Sleuth! flunked the test.

Page 69, it turns out, isn’t a bad spot to plop yourself into the book if you want to learn who and what it’s about. Because those people sitting around gabbing? They’re the detectives. And what they’re gabbing about is the art of detection. Check it out.


“It’s life and death, and all that matters is getting the job done and done right. Only amateurs and fools take it lightly.”

He might have been rebuffing Valmont, yet by the time he finished he was glaring at me and Gustav.

Other than the toast to Holmes, my brother hadn’t made a sound since we’d sat down. Now, though, he wheezed out something whispery and incomprehensible.

He coughed and tugged at his collar and tried again.

“I couldn’t agree with you more, sir,” he said. “I may still be an amateur, as you figure it, but I take detectivin’ as serious as anyone at this table. I been makin’ a study on it for some time now -- and been through one calamity after another for my trouble. This much I’ve learned, though: You can’t boil sleuthin’ down to a simple set of rules and homilies and expect that to get you to the truth or justice or whatever you wanna call it.”

“I’m surprised to hear that from you, Old Red,” Curtis said. “Don’t tell me you’ve lost your faith in Mr. Holmes.”

“Not in The Man, exactly. But I’ve come to have my doubts about followin’ in his footsteps. I ain’t so sure anymore another feller could do what he done. Outside of a magazine, anyhow.”

Curtis aimed one of his big, sickle-blade grins at King Brady and Frank Tousey. “On that much, at least, we’re entirely in agreement.”

“I, on the other hand, beg to differ,” someone said from across the table, and when I glanced that way I was surprised to see it was one of the waiters.

He was an olive-skinned fellow with a thick black beard -- a Greek or Turk by the look of him -- and after sliding a mixture of greens, cheese, and what seemed like sagebrush in front of Pinkerton, he shocked us all by sliding himself into the empty seat to the man’s right.

Hey, wait -- what gives with the talkative waiter? Well, that is a twist...one you’d have to turn the page to see played out. But this isn’t the Page 70 Test, so we have to stick with what we’ve got. And what we’ve got is Old Red laying out his state of mind -- and what’s at stake in the book.

I’ll admit it: I was pretty rough on Old Red and Big Red in the first four “Holmes on the Range” novels. The brothers set out to follow in Sherlock Holmes’s footsteps, but that led them, more often than not, to disaster. So much so that even Old Red’s begun to question his devotion to Holmes.

Will he regain his lost faith and solve the mystery? Will he get his detectiving groove back in time to win the contest? Will he cross paths with Aunt Jemima and, if so, will he try her pancakes?

Learn more about the book and author at Steve Hockensmith's website.

The Page 69 Test: On the Wrong Track.

My Book, The Movie: Holmes on the Range.

The Page 69 Test: The Crack in the Lens.