Samrat Upadhyay is the Director of the Creative Writing Program at Indiana University--Bloomington. His books include the short story collection Arresting God in Kathmandu (2001), the novel The Guru of Love (2003), and the story collection, The Royal Ghosts (2006). 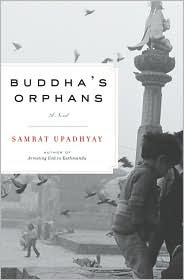 He applied the Page 69 Test to his new novel, Buddha's Orphans, and reported the following:

It is indeed strange that p. 69 would land me squarely into the most pivotal moment in the first third of my novel Buddha’s Orphans, a moment that changes the lives of its major players.

Buddha’s Orphans begins as the story of a boy, Raja, who is discovered by a corn-selling woman, Kaki after he’s abandoned as an infant in the city park. In order to educate him, Kaki finds employment as a live-in servant in the house of a bureaucrat, Ganga Da, who sees the boy as someone whose presence would act as a palliative for his mentally ill wife. But Kaki can’t stand the attachment that begins to form between Raja and Ganga Da’s wife, and one day she quits her job and takes the boy. Ganga Da begins to think:

An idea pushed itself into the forefront of Ganga Da’s mind. Throughout the night, as he drifted in and out of sleep, he pondered it, and by dawn he knew what he needed to do. He quietly changed his clothes, opened his small steel safe inside the almirah, extracted eight hundred rupees, and left the house. His destination was only a short distance away, a house near the incline that opened to the Thamel market.

He spotted the house owner, Bhimnidhi, in his garden, taking a bath with a lungi wrapped around his waist. Bhimnidhi worked as a mid-level administrator in Prasuti Griha, the maternity hospital in Thapathali. “Ganga Da, what an honor,” he shouted as he splashed water on his chest. Ganga Da waited until he was done bathing, then they both went inside.

Bhimnidhi’s wife brought them tea. Ganga Da shut the door behind her, and told Bhimnidhi what he wanted.

“But that’s impossible,” Bhimnidhi said. “This early in the morning, you come to talk about such a difficult matter. It’ll be a paap to do such a thing.”

“The boy will have a better life with us. You’ll be performing a dharma, not a sin.”

“I’m a Brahmin’s son, Ganga Da. Even contemplating such a thing is a sin for me.”

Ganga Da reached for his wallet, took out five hundred rupee notes, placed them on the mat in front of him one by one and smoothed them. “Everyone will benefit. My wife will get a son, I’ll have peace of mind at home, and you …” He extended his lower lip toward the notes. Just a few weeks ago, Ganga Da had heard Bhimnidhi complain about his two teenage sons, whose extravagant tastes he couldn’t fulfill with his modest salary. Five hundred rupees was close to Bhimnidhi’s monthly salary, Ganga Da knew.

Bhimnidhi warily observed the bills in front of him. After a moment he cleared his throat and said, “You put me in a bind.”

Ganga Da’s act on p. 69 changes the dynamics of the novel, provides a charge to the love story that ensues, and begins the suffering of one of the most endearing characters from all of my books, Kaki.

Read an excerpt from Buddha's Orphans, and learn more about the book at the Houghton Mifflin Harcourt website.