Joan Leegant, author of An Hour in Paradise, won the Edward Lewis Wallant Award for the best book of Jewish-American fiction and the L. L. Winship/PEN New England Award. 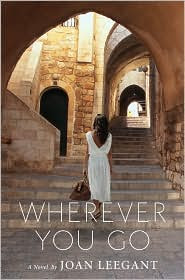 She applied the Page 69 Test to her new novel, Wherever You Go, and reported the following:

Wherever You Go is about three Americans in Israel caught in the vortex of religious and political extremism. There’s an act of catastrophic violence at the heart of the novel; all three characters are irreparably changed by its fallout.

The book is structured in alternating chapters among the three main characters – Yona Stern, Mark Greenglass, and Aaron Blinder. They don’t know each other when the book opens, but their paths eventually collide. Page 69 occurs at the beginning of a chapter about Mark Greenglass, which introduces his father, Lenny Greenglass. Mark is a former drug user and dealer who, twelve years earlier, embraced Orthodox Judaism as a way of rehabilitating himself. The relationship between father and son has long been fraught. Lenny is a wealthy New York businessman who doesn’t understand his son and has no patience for religion; Mark for his part gave his father some unsavory pieces of his mind during his drug years and contributed his fair share to the relationship’s tension. On page 69, Mark, in from Jerusalem to teach for two weeks at a Manhattan yeshiva, plays with the cap of his father’s soda bottle while Lenny fastidiously eats his dinner and attempts to make conversation:

“So what’s the job this time,” Lenny said, efficiently cutting his steak, not lifting the sentence into an interrogative because he didn’t expect much of an answer. None of Greenglass’s jobs ever satisfied his father because none of Greenglass’s jobs made any money, and money was all that counted for Lenny. Unlike his and Felicia’s acquaintances, Lenny, the son of a dry cleaner who’d grown up in a four-room apartment above the store, didn’t pretend that academic status was just as worthy, or that artistry or bookishness or any of the other effete or intellectual things others occasionally gave lip service to merited applauding – the friend’s nephew who overnight became a success because he finallly sold a play, the cousin’s son who at thirty-two got tenure at Yale. So what? Lenny would shrug, consistent to the core, a trait his son found oddly admirable: at least he wasn’t a hypocrite. What do they get up there in New Haven? Forty thou? Fifty? Dreck.

Though Lenny isn’t the most sensitive father on the planet, I have sympathy for a man like him who is, after all, a product of his time and circumstances. His son’s choices are baffling to him – and worse: they represent a regression, an embrace of religious strictures Lenny’s immigrant grandparents couldn’t wait to escape. In fact, failed connections between fathers and sons run all through this novel, and though I wouldn’t go so far as to say that the various disappointed or disappointing sons who populate its pages seek out religion or ideology as a way of replacing what they didn’t get from their fathers, I might say the two elements are related. There are lots of reasons we attach ourselves to a cause or a discipline, and principles are one part of it. There’s a lot of psychology at play, too.

Preview Wherever You Go, and learn more about the book and author at Joan Leegant's website.