Juliet Marillier's historical fantasy novels are published internationally and have won a number of awards. 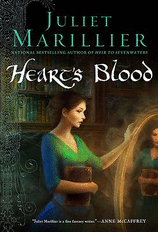 She applied the Page 69 Test to her new novel, Heart’s Blood, and reported the following:

On page 69 of Heart’s Blood our narrator, the young scribe Caitrin, is working in the disordered library of her new employer Anluan, chieftain of Whistling Tor. Anluan is an ill-tempered, socially awkward man shunned and feared by local society. Caitrin is wary. Her first experience in this library involved a terrifying mirror, and she does not know what she may uncover. As she puts the materials in order, Caitrin finds a set of notebooks created by Anluan’s father, Irial:

Irial’s books were works of art. His botanical drawings were finely detailed and executed with both accuracy and charm. He’d used a crow quill sharpened to a point. It was quite plain the artist had loved what he did, unusual as such a pastime might be for someone in his position. It made me wonder what sort of leader Anluan’s father had been. Perhaps he, too, had failed to carry out the duties the folk of Whistling Tor expected of their regional chieftain. Tomas and Orna had been blunt about Anluan’s inadequacy in that regard. Perhaps his father had spent hours in the garden and in the library, pursuing what had obviously been an activity he enjoyed with a passion, and had neglected his district and his folk. Perhaps he had never taught Anluan how to be a chieftain.

Something caught my eye, and I turned the little book in my hands sideways. Irial had written his botanical notes in Irish, which made sense – this language would render his work accessible to a wider readership. But in the margin, in a script so small and fine that at first glance it seemed decoration, not writing, was an annotation in Latin. The most potent remedy known to man cannot bring her back. This is the hundred and twentieth day of tears.

A chill went down my spine. What was this? Another secret, something so private the writer had chosen to set it down in this odd, almost cryptic fashion? Whose loss had Irial mourned for so long?

Page 69 does give a good idea of the flavour of the novel, which is part historical romance, part ghost story. The passage is slowish, but I reckon a reader would want to turn the page and find out more. As Caitrin peels back layers of family history within Anluan’s crumbling old fortress, she discovers many dark secrets. At the same time she grapples with her own past, for she has come to Whistling Tor damaged, frightened and on the run. Heart’s Blood is loosely based on Beauty and the Beast, and its theme is acceptance – learning to accept yourself with all your flaws, and learning to go beyond surface appearances to recognise the true strength of others.

Read an excerpt from Heart’s Blood, and learn more about the author and her work at Juliet Marillier's website.