Tony Richards sold his first short story at the age of twenty-one, and hasn't stopped selling fiction since. He has written SF, mystery, and mainstream tales, as well as dark fantasy, and has appeared in most major magazines and anthologies in the genre. His work has been praised by the 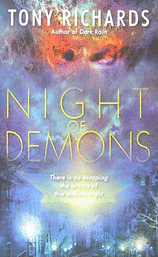 likes of Ed Gorman, Ramsey Campbell, Graham Joyce, and the late Ronald Chetwynd-Hayes, and he has been nominated for both the Bram Stoker and British Fantasy Awards.

Dark Rain, Richards' first novel set in the fictional town of Raine’s Landing, Massachusetts, has appeared at The Page 69 Test and My Book, The Movie.

He applied the Page 69 Test to its sequel, Night of Demons, and reported the following:

Then she tailed off, her expression growing puzzled.

The line apparently went dead. She peered at the phone, then tried re-dialing. And didn’t even get an answer, this time. I had been expecting that. She had no way of knowing it … but when you’re in this town, there is a real serious problem attached to communicating with the world beyond its borders.

“What the hell is going on?” She jabbed at the keypad a few more times. “It was working before.”

“We have trouble with reception,” I explained. “The woods.”

“We’re so deep in them. They mess up the signal sometimes.”

She squinted at me awkwardly, then stared out through her side window again.

“This really is an isolated place, huh? I couldn’t imagine living anywhere like this.”

“Oh,” I assured her, “it can get pretty interesting here from time to time.”

“What, you have a swap meet twice a year?”

Which should have annoyed me. But I was getting used to her attitude, and didn’t let it bother me. In spite of her appearance, she carried a hardness with her, like a shaft of steel inside a velvet coating. She had either been born with it, or it had formed. But there was no doubt that she needed it. I found it hard to even imagine what her job was like. All those gangsters. All those junkies. Jesus Christ, a city cop.

She’d obviously been places and done stuff I could only dream of. I was learning new things, the whole while she talked. And so the best course of action, I finally decided, was to simply go along with the flow of this, and hope she never found out how different a place the Landing really was.

***
Exactly like last year’s Dark Rain, my current novel -- Night of Demons -- is set in the fictional town of Raine’s Landing, Massachusetts. It looks, on the surface, like a perfectly ordinary New England community, a little larger than it ought to be perhaps, but that is all. As is so often the case in this type of fiction, though, outward appearances can be terribly deceptive.

The fact of the matter is, the place ceased to be a normal township way back at the end of the Sixteen Hundreds. Because the premise of both novels is that there were real live witches in that more famous Massachusetts town called Salem. Clever and prescient, they saw the trials of 1692 coming, and fled to Raine’s Landing instead. They married into the local population, choosing well-off families or families who would be wealthy later on. And by the present day, their descendants pretty much run the place, and the town is full of strange, dark magic.

Except there is one big snag. Isn’t there always? One of those original Salem witches -- Regan Farrow -- managed to annoy the townsfolk so much that they burned her at the stake. As the flames closed around her, she spat out a curse with her dying breath. “If I cannot leave, then none of you ever shall. And you shall dwell alone here.”

It’s known, appropriately, as Regan’s Curse, and has hung over the place for some three hundred years. No one born in Raine’s Landing has ever seen the outside world, although they can read about it, glimpse it on TV. As for visitors … supplies come in for sure, and trade is done. How could the town survive otherwise? But those who arrive in the Landing are immediately filled up with anxiety. Voices began ringing in their heads, urging them to leave again. They comply as quickly as they can, and forget about the place as soon as they’ve crossed its borders. But in Night of Demons, there are two exceptions.

The first is a serial killer called Cornelius Hanlon, who has fled Boston with the police on his tail. The man is so deranged the voices in his head mean nothing to him, and he enters the Landing with comparative ease. By Page 69, he has murdered the town’s oldest and most respected adept, and gotten hold of a magical device that, even though he doesn’t know it, will give him almost limitless power.

The second is Lieutenant Detective Lauren Brennan of Boston’s Homicide Division, who at the top of the page is trying to reach her office on her cell phone. She is so utterly determined to catch Hanlon she has crossed into the Landing too, the curse having little effect on her. She is in the car of Ross Devries, the hero of both novels, a former cop turned supernatural troubleshooter. As yet, she has not the first inkling of the nature of the place she has wound up in. And Ross is trying to make sure it stays that way.

Read an excerpt from Night of Demons, and learn more about the book and author at Tony Richards' website and blog.